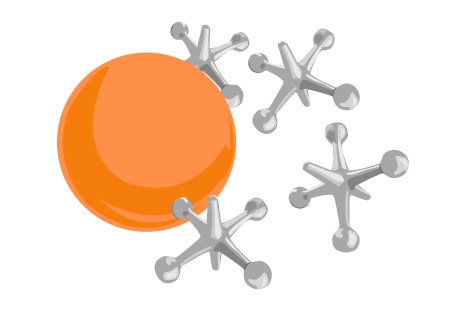 2 people
A Checkers board

A regulation checkerboard is an 8 by 8 square playing surface with alternating color boxes, often black and red. Players’ cylindrical pieces, or men, are arranged on the darker squares of the first three rows, and the player with the darker color pieces usually moves first. There are two ways to move: a simple slide of a piece diagonally forward to an unoccupied square, or a jump over the other player’s piece, also diagonally forward into an unoccupied square. If a jump move is available, it must be made — even if other non-jumps are available. A checker moved into the back row of the opponents’ side becomes a king. Only kings may move and jump backward. Once a man is jumped, it is removed from the board. A player wins by capturing all the opposing player’s pieces, or by leaving the opposing player with no legal moves.

Jump all of your opponent’s men, leaving him with none or with no legal moves.

An oldie but a goodie….

Historians and scientists discovered that the earliest form of checkers may have been a game discovered in an archeological dig at Ur, in what is now Iraq. Through the process of carbon dating, it is believed that this game was played around 3000 B.C., making it one of the oldest games in history.