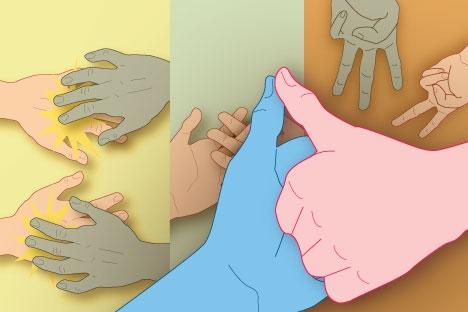 Remember when the best games you could play with two hands required only … two hands? Get the grandkids to put away the handheld video games by playing these mano-a-mano classics.

Tuck the thumb of your right hand underneath your first two fingers so that the knuckle is hidden but the thumbnail is visible. Straighten all the fingers of your left hand except the index finger. Fold it down at the middle knuckle as if the top half is gone.

Now press your hidden right thumb knuckle against your folded left index finger knuckle with the two fingers of your right hand hiding the connection.

Slowly pull your thumb away, making it look like you are dismembering your finger. Wriggle the thumb end for effect!

Take a trip back in time with this dance craze from the 1950s, made popular again in the late 1970s by the hit movie Grease. Kids love to learn it.

Here’s how it goes:

Play this song and put it all together to the beat! Pat-pat-clap-clap-hand-hand-bump-bump-thumb-thumb!

This classic clapping game likely dates as far back as the Civil War, although its exact origins remain a mystery. It’s a more complex version of Pat-a-Cake, with knee slaps, pinky hooks, and more. Show your grandchild how you used to play!

They jumped so high, high, high They reached the sky, sky, sky And they didn’t come back, back, back ‘Til the 4th of July, ly, ly!

This is a great hand game to help two grandchildren settle a dispute — who gets to go first, who gets to sit in the front seat, etc. It’s a simple game of chance.

Each player holds one hand behind their back, and secretly chooses to put out one finger or two. One player calls odd or even and says, “One, two, three, shoot.”

Players simultaneously put out their hands with one or two fingers extended. Add the fingers together to see who wins. For example, if both kids throw one finger, then the sum is two and even wins.

Need a game to play on the fly? This is it. It’s easy, quick, and addictive for kids of all ages. On the count of three, each player “throws” his fist into the middle.

To make Rock, make a fist; for Paper, hold your hand out flat; and for Scissors, extend your middle and index fingers.

If players make the same gesture, the game goes on. If not, the winner is decided by a harmonic and intransitive method — Rock crushes Scissors; Scissors cuts Paper; Paper covers Rock.

Use the game to settle disputes about who goes first, or play a best-of-ten (or 20) match just for the fun of it.

Despite its name, you don’t have to leave each other red-handed to enjoy this game of manual quickness. Start by placing your hands out in front of you, palms up.

Have your grandchild place their hands, palms down, on top of yours. Your hands should not rest against each other, but should just barely touch as they hover in midair.

Your objective is to quickly bring your hands around your opponent’s and tap the backs of their hands. Your opponent tries to anticipate this maneuver, pulling their hands away to avoid the tap.

If you can tap the other side of your opponent’s hands three times before you miss, you win. If they successfully avoid your tap, then you switch positions and they try to tap your hands.

This timeless kids’ game is a fun diversion in any dull moment. Clasp hands so your fingers curl together and your thumbs face each other, pointing up.

Together, announce: “One, two, three, four, I declare a thumb war.” Then, using only your thumb, attempt to pin the other person’s thumb to their hand before they can pin yours.

To win, one player must pin his or her opponent’s thumb long enough to say “One, two, three, four, I won the thumb war,” without losing grip on it.

Which Hand Is It In?

Young kids delight in this disappearing-object game. All you need is something small enough to ball up in your fist so that no one else can see that it’s in there: a penny, a marble, a rolled-up piece of paper, etc.

Put your hands behind your back, concealing the object in one. Then show your grandkid both fists. They will love guessing which hand hides the object, especially if they get to keep the prize once it’s found.

Pat-a-cake, pat-a-cake, baker’s man Bake me a cake as fast as you can Pat it and prick it and mark it with a B Put it in the oven for baby and me

The basic clapping pattern alternates between clapping your hands and clapping against your partner’s. From there you and your grandchild can throw in your own creative sequences to spice up the game.

This classic hand game for young children is easy to play and has a fun rhyme to say. Here’s a refresher course if it’s been a while.

Fold your hands together with fingers interlaced downward and hidden between your hands: “Here is the church.”

Raise your index fingers and point them together toward the sky: “Here is the steeple.”

Open your thumbs: “Open the doors.”

Keep your fingers interlocked and turn over your hands so your fingers are facing up. Wriggle them as you say: “And see all the people!”

One thing that hasn’t changed about kids: they love being a part of an exclusive club. Create your own by making up a handshake only you and your grandchild know.

Here are two kinds you can try, a secret handshake and a fancy handshake:

Don’t pick so many elements that you can’t remember the sequence, and practice it a lot. The more effortless your elaborate handshake seems, the better.

Show off your favorite shadow creatures to your grandchild. All you need is a bright light and a blank wall. Do your best bird or butterfly impression, and see what fun new shadow puppets you can create together.

Need some inspiration? Check out this website of manual manipulations: shadow-puppets.com.