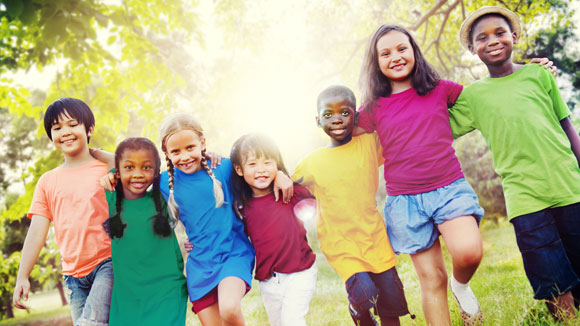 Blind Man’s Bluff
Dodge the groping movements of your blindfolded grandchild, or It. If It catches you, it’s your turn to be blindfolded. Get rules.

Disc Golf
Also known as Frisbee Golf. Hit your target in as few throws as possible while working your way around an outdoor course. Get rules.

Duck, Duck, Goose
Also known as Duck, Duck, Gray Duck. If someone tags your head and yells goose, the chase is on! Try to tag that person before he gets back around the circle to your spot. Get rules.

Flashlight Tag
A game for  night owls — use your flashlight to tag the evasive players. Get rules.

Follow the Leader
A game for all the copycats of the world. Get rules.

Four Square
Four squares, four players, one ball. Guard your square and try to knock other players out of theirs. Get rules.

Freeze Tag
If you’re touched by It, you’re frozen — at least until a non-frozen player unfreezes you. Get rules.

Hopscotch
Chalk it up to good old-fashioned fun — hop, skip, and jump on a sequence course drawn on the ground. Get rules.

Kick the Can
One player guards the can while the rest try to kick it over before being tagged. Run, hide, kick, score. Enough said. Get rules.

Marco Polo
Swim blindly, but keep your ears open to tag the other players. When you say “Marco,” they have to say “Polo.” Get rules.

Mother May I?
Beg and plead to Mother for permission to move ahead. Wait… are you sure this is only a game? Get rules.

Red Rover
Two teams of equal size form opposing arm-in-arm chains that one player on the opposite team must run through to break. Get rules.

Ring around the Rosie
Sing a song and spin in circles. You’ll all have a ball! Get rules.

Sardines
A twist on hide-and-seek: Everyone seeks while one hides. When the player is found, the seeker hides with him. The last person to join the group is the odd man out. Get rules.

Simon Says
Follow directions, but make sure you get Simon’s say-so. Get rules.

Statues
In this game, the Statues only move when the Curator isn’t looking. The first Statue to sneak up and touch the Curator wins. Get rules.