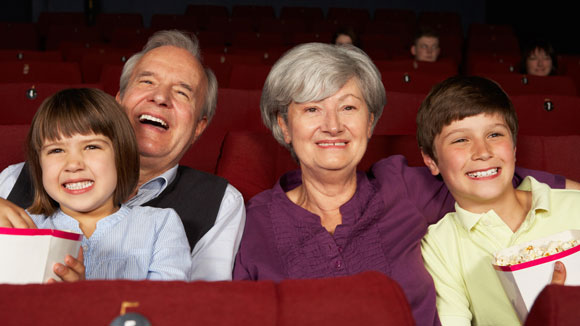 The plot: Pai (Keisha Castle-Hughes) is a young Whangara girl who wishes to replace her grandfather, Koro (Rawiri Paratene), as head of her tribe. The only problem? Leadership is customarily meant for first-born males, a tradition Koro is desperate to uphold despite Pai’s obvious qualifications. Needless to say, he comes around.

Why it’s special: Simply, it’s a charming and thought-provoking film about family, community, and identity, with a granddaughter and grandfather at its center. The performances are lovely all around, but Castle-Hughes is especially luminous; she was just 11 when filming began, and was Oscar nominated for her work.

Why it’s special: Edwin is a maniac. Olive is the human embodiment of innocence. Somehow, their bond makes sense. She smooths his rough edges, and he gives her confidence. Breslin (just 9 at the time of filming) and Arkin were nominated for Academy Awards for their performances; Arkin won.

The plot: When Little Tree (Joseph Ashton) is orphaned, he is taken by his devoted Scottish grandfather (James Cromwell) and warm, wise Cherokee grandmother (Tantoo Cardinal) to live in the Smoky Mountains, where he learns about nature, survival, and pride.

Things get dicey, though, when he’s forced into a reform school bent on erasing all traces of his Native American heritage.

Why it’s special: In a country where almost 5 million children are raised by their grandparents, it’s refreshing to see the relationship portrayed with such tenderness and obvious love. Between that, the rugged natural scenery and gentle tone, The Education of Little Tree feels like classic Disney live-action films of old.

The plot: Rose (Toni Collette) is buttoned-up professional searching for contentment. Maggie (Cameron Diaz) is Rose’s party-girl sister, who sleeps with her boyfriend at the first opportunity. Ella (Shirley MacLaine) is the grandmother who lets Maggie move into her Florida retirement community, turning her into a respectable human being in the process.

Why it’s special: In the wrong hands, In Her Shoes could have been a throwaway played for vapid laughs. Instead, a trio of nuanced performances and Curtis Hanson’s sensitive direction lend the film resonance and depth. Especially meaningful is Maggie’s relationship with Ella; it gives the younger woman a sense of self-worth, and the older one, a more vital connection to her formerly estranged family.

Trials, temptations, and an everlasting gobstopper of fun happen along the way.

Why it’s special: On one hand, it’s a colorful, whimsical, children’s musical set in a candy wonderland staffed entirely by little orange people. On the other hand, it’s a buddy picture.

Charlie and Grandpa Joe are intergenerational co-conspirators, and the factory, their exuberant funhouse. More importantly, they bring out each other’s best selves; Grandpa helps Charlie stay grounded, and Charlie shows Grandpa the importance of honesty.

The plot: For a subtle, thoughtful movie, Ulee’s Gold has a pretty involved story: Ulee (Peter Fonda) is a bee-keeping widower raising his granddaughters, Penny (Vanessa Zima) and Casey (Jessica Biel), after his son, Jimmy (Tom Wood) is shipped off to prison.

Problems arise when Ulee must rescue his drug-addicted daughter-in-law from Jimmy’s partners, who threaten to hurt the grandkids if he doesn’t find the $100,000 they believe Jimmy stashed away.

Why it’s special: By nature a solitary man, Ulee isn’t thrilled with the state of his family. Still, the reticent beekeeper steps up to protect and unite them, providing Penny and Casey with the role model they so desperately need. Fonda, in a Golden Globe-winning role, is the quiet storm at the center.

The plot: You know this one: Retirees find the fountain of youth in a Florida swimming pool. The aliens who put it there offer them a shot at eternal life, but only if they journey to outer space, leaving their loved ones behind. For Ben’s (Wilford Brimley) beloved grandson, David (Barret Oliver), this is really upsetting.

Why it’s special: Is there anything sadder than the prospect of never seeing your grandchild again? And is there anything more gut-wrenching than seeing that same little boy set you free? If you’ve seen Cocoon, you know what we’re talking about. If you haven’t, what are you waiting for? (Note: Bring tissues.)

The plot: After long-suffering wife Helen (Kimberly Elise) is given the heave-ho by her rich, philandering husband, Charles (Steve Harris), she moves in with Grandma Madea (Tyler Perry). There, Helen cleans up her life and falls in love with stone fox Orlando (Shemar Moore).

Why it’s special: On film, most grandmas are sweet little old ladies who comfort loved ones with tea and aphorisms. But a select few (okay, one) are 6-foot-5, gun-toting lunatics who take them in, whip them into shape (not literally), and set them back into the world 10 times stronger than they were before. Such is Madea.

And whether or not you go for Perry’s signature combination of melodrama and camp, Madea is a grandma to be reckoned with. And this is her best film.

Why it’s special: Simply, it’s a brilliant, frequently funny film about a terrible situation. And while Billy spends much of Hope & Glory alternately terrified and in awe of George, the old man proves a solid guiding force in the absence of the boy’s father. Their last scene together—the last scene of the movie, as well—is just perfect.

The plot: It’s a few months in the life of the extended Buckman clan, during which divorced mom Helen (Dianne Wiest) learns she’s going to have a grandchild, grandparents Marilyn and Frank (Eileen Ryan and Jason Robards) become parents again, and Great Grandma (Irene Shaw) hovers quietly, smilingly over all.

Why it’s special: Hilarious and poignant, Parenthood is summed up neatly by Great Grandma’s monologue:

“You know, when I was nineteen, Grandpa took me on a roller coaster. Up, down, up, down. Oh, what a ride! I always wanted to go again. You know, it was just so interesting to me that a ride could make me so frightened, so scared, so sick, so excited, and so thrilled all together! Some didn’t like it. They went on the merry-go-round. That just goes around. Nothing. I like the roller coaster. You get more out of it.”

{{slide.caption}}
{{slide.credit}}
The editors of Considerable.com determine the recommendations of products and services that appear in articles through rigorous reporting. If you buy a product from a retailer through a link on the site, Considerable.com may be paid a commission through our participation in an affiliate marketing program. These fees in no way affect our reporting or recommendations.