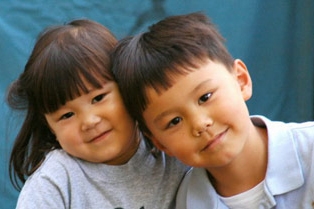 So, what do our grandkids remember most about last summer’s camping trip? Gobbling s’mores and watching plastic wrap melt in the hot ashes.

Still, our first camping trip with Alex, 5, and Sofia, 3, was a success. We took them to Camp Richardson near the town of South Lake Tahoe, Calif. The recreational resort on the shores of Lake Tahoe offers 300 campsites in a beautiful pine forest, a general store to buy forgotten items, an ice cream parlor for special treats, plus beaches and attractions that appeal to children.

Alex and Sofia were already experienced travelers before our trip. Their parents had taken them to upscale resorts that thrilled them with elaborate swimming pools full of waterslides, bathrooms where sponges spelled out their names, and room service that delivered ice cream at the touch of a button. Tents, sleeping bags and lanterns, however, were all new to them.

As we drove along the dirt road searching for our tent site, Alex looked around and asked, “Where’s the pool?”

“No pool, just a gigantic blue lake with cold, cold water,” I said.

“No water slides, but plenty of sand to build sand castles,” I replied, with lots of enthusiasm. He looked skeptical.

Once we found our site, Grandfather Jim put the kids to work; they handed him poles and stakes to rig up the tent. Our old canvas tent, which sleeps six, had not been out of its carton since their dad, our son, was in a scouting program 20 years ago. The zipper to the front entryway was torn and dead bugs littered the plastic tarp. Still, the kids thought the little blue “house” was perfect.

They spread their sleeping bags on the canvas floor and ran around zipping and unzipping the windows. They were even thrilled when tiny frogs hopped out of the campsite storage cabinet meant to hold our food. I smiled weakly at the frogs and transferred the food and the cooler back to the trunk of the car.

I quickly learned to turn a blind eye to dirt. Fortunately, Sofia, our little fashionista, forgot about color-coordinated outfits and concentrated on searching for the frog family living at our campsite. Alex followed his grandfather around, curious to see how the gas stove worked and why the lantern emitted a strange hissing sound before it was lit.

Restroom treks were more of a problem. Since the closest facility with flushing toilets and running water was 200 yards away, I had to make sure that the dreaded announcement, “I’ve got to go NOW!” was never uttered. Carrying a potty ring for Sofia, along with towels and soap, we traipsed back and forth on a regular basis.

What worried us most, were nighttime temperatures in Lake Tahoe. Because the lake is located at 6,000-feet elevation, temperatures can drop into the 40s. Upon my request, their mother packed wool caps, socks and gloves, along with heavy pajamas that covered them from neck to toe.

The campfire that night was a big hit. Sofia and Alex watched intently as their grandfather stacked the wood in the fire pit and lit the fire. They threw plastic wrap into the hot ashes and giggled as it melted rapidly. Most of the marshmallows they roasted at the end of long sticks turned black. Nevertheless, they declared the graham cracker sandwiches with marshmallow and melted chocolate “yummy.” I ignored their dirty faces and sticky fingers until it was time for bed.

After another trek to the restroom, we dressed them in all their extra night apparel. As they crawled into their sleeping bags, we showed them where the flashlights were located and how to turn them on. Each one did so once, then they snuggled into their sleeping bags. Jim and I sat by the tent so they could hear our voices in the darkness. No one asked for water. No one became frightened. Soon, no sound came from inside the tent.

I slept fitfully that night because of the cold night air and the hard ground. Jim also slept poorly. He kept turning on the flashlight to make sure the kids were still tucked inside their sleeping bags. Sure enough, Sofia managed to crawl out of her bag in her sleep and needed to be stuffed back inside in the middle of the night.

The next morning, our little campers arose spry and energetic. I arose creaky and sleepy. In the restroom, we heard news that a bear had rummaged through a nearby campsite because the campers left garbage out. Fortunately, the s’mores that fell into our campfire did not entice the bear to our tent site.

As the children helped their grandfather dismantle the tent, Alex asked when we would go camping again. The answer? This summer. We have already made reservations and the kids are excited. Meanwhile, I’m looking for a comfy inflatable mattress to appease my achy back.