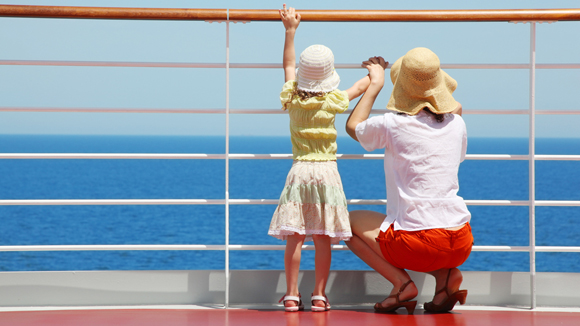 Lauren is our oldest grandchild, the first to reach age 10, so she’s the first to christen our newest family tradition: reaching double digits means being old enough to take a trip with us — her grandparents — without parents.

But it’s also nice to have a buddy along, someone close in age to share these new experiences. So Lauren chose to invite her younger sister, Alexis (age 8), to join her on a weeklong cruise to Alaska.

Perhaps having the two sisters, who are very good friends, traveling together proved a charm for warding off any homesickness. Lauren had been to sleepaway camp and loved it, so no worries there. As for Alexis, also no problem. Both girls were way too busy loving their new adventure to pine. We did, however, make sure to focus on take-home gifts while shopping at every port, a nice way to remember parents and Alison, their younger sister back home.

We four shared a week of adventures in the wilds of the North aboard a floating wonderland that was packed with unaccustomed luxuries and delights. This particular wonderland was the Celebrity Infinity, a cruise ship so impressive in size and style that when Lexi saw it in Seattle, she blurted in a breathy whisper, “Wow! I want to marry this ship!”

And later, at the end of our adventure, after they had hugged their newfound buddies in tearful goodbyes, the two girls were already plotting ways to save enough money so they could someday take the cruise again.

The idea of taking the grandchildren on a cruise sounds so simple, right? It’s the perfect no-brainer vacation: Once you get everybody settled on the ship you’re home free. No hassles. No shuttling from hotel to hotel; no trains to catch; no luggage to keep track of; no foreign currencies to ponder at mealtimes.

All true. But we also learned that there’s no substitute for well thought-out preparation. Our first grandchild-travel tradition took months of long-distance planning, researching, and coordinating. Here’s what we learned:

1. Get the kids involved. Lauren and Lexi did research on Alaska wildlife for months before the trip. Lauren had already completed a school project on whales, so she was thrilled with the prospect of seeing them in their natural habitat. We and the kids and their parents all pored over details of the destinations and the shore excursions as well as the ship, studying and preparing for the real thing.

3. Establish the ground rules immediately. As grandparents in charge, we were supercautious. The girls were not allowed to wander the ship alone. Many times I did my best to make myself “invisible” while they played with new friends in the pool, but I was always there, just in case.

4. Be alert to shore excursion “brochure-ese.” Read carefully and watch for red-flag clues. We spent a lot of time selecting what we hoped would be just the right shore excursions, based on the descriptions. We wanted to avoid “high-risk” activities with the girls, such as heli-flightseeing and sea kayaking. And my bad knees ruled out any steep climbs or stairs. Yet it was important that the girls experience a good cross section of Alaska’s natural wonders. Of the three excursions we selected, two were disappointing: one because the undersea “views” promised in the description were truly boring; and the other — a “walk” through the rain forest — turned out to be a continuous series of steep stair climbs.

5. Have a notarized letter authorizing you to travel with the children. Many border crossings require it, as did our cruise ship.

6. Book adjoining rooms, if possible. This is a convenience as well as a comfort to grandparents (like us) who tend to be overly cautious.

Lauren and Lexi chose not to participate in the ship’s extensive Youth Program, though many other children did. Our granddaughters decided they would rather hang out with us while on the ship, and also be able to take all the shore excursions with us.

Shannan Still, the manager of the ship’s Youth Program, highlighted some of the essentials she feels grandparents should consider:

Lauren’s and Lexi’s tips for grandkids