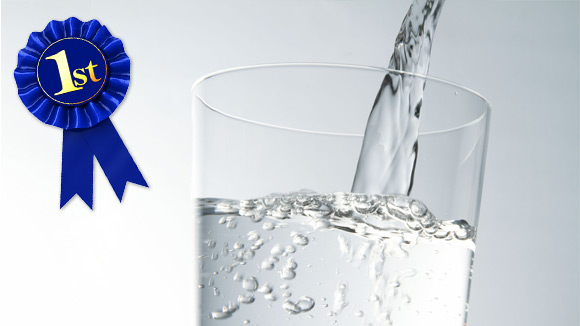 Americans gulp down 1 billion-plus glasses of tap water each day, so most of us likely know: all tap water is not created equal. Some mouthfuls taste mountain-spring fresh, whereas others are all-out unsavory.

While government agencies regulate the safety of our public drinking water supply, the flavor profile is affected by various factors, mostly relating to the water’s source and the treatment it receives. So whose H20 earns top honors for its thirst-quenching quaff-ability? Read on for the water taste-test winners from competitions across the country.

There’s a medal for that

Great American taste test: For over a decade, the National Rural Water Association (NRWA) has ranked tap waters from around the country. Their Great American Taste Test awards the top three for their overall taste, clarity and bouquet. “Judges tell me that the best-tasting water tastes ‘pure,’ ” says water analyst Mike Keegan, of the Oklahoma-based NRWA. Other descriptors include “refreshing,” “satisfying,” and “tasty.” And most of the time, the typical winners are characterized as “tasting good versus tasteless,” he adds.

All the winners have long-time reputations as having excellent water. Keegan says their water comes from “deep, pristine and very old ground water sources.” Of the finalists, Curtis was the only one that does not add chlorine to the water. “But they’re all below the very rigorous federal standards for chemicals in their water,” says Keegan. And the senator from Utah, when he heard of Stansbury Park’s win, is reputed to have asked for a shipment of that water delivered to the U.S. Senate so he could make jello from it.

Berkeley Springs International Water Tasting: Referred to as the “granddaddy of water tastings” by its perennial “Watermaster” Arthur von Wiesenberger, the Berkeley Springs competition accepts entrants from around the globe, which are rated for their: appearance (it should be clear – or slightly opaque for glacial waters), aroma (there should be none), taste (it should taste clean), mouth feel (it should feel light), aftertaste (it should leave you thirsty for more).

According to the competition’s organizers, five out of the six winners had claimed an award at Berkeley Springs in previous years.

“Best of the Best” Tap Water Taste Test: Hosted by the American Water Works Association, this annual competition judges regional municipal water systems winners from across the U.S., which allowed Boston, Massachusetts, to claim first and second place this year.

What are they doing in Boston to make such delicious water? According to a NationalGeographic.com article, the secret lies in the city’s watershed protection. As a result of legislation passed in 1985, the forest and preserved land that ring the city’s source water are so stringently protected that the water requires minimal filtering and treatment before it hits municipal taps.

National Purdex Awards: Looking for a more objective evaluation of your tap water that goes beyond mere taste? Purdex is an independent research company focused entirely on gathering and disseminating data on water purity. Using a proprietary scoring algorithm known as the Purdex Score, each year they compare drinking-water test samples from more than 50,000 community water systems in the U.S. to the EPA’s water-quality standards to find out whether contaminant levels are really being abided by. The National Purdex Awards list the top three purest water systems in each of 41 U.S. states, from which we found the highest-ranking towns in the country.

How the source & treatment affect flavor

All tap water is treated to various extents, depending on the level of contaminants found in the source water, says Keegan. It might seem that treated water then, would have an unpleasant taste, but Keegan says that taste preferences “are very subjective” — the combination of treatment processes can sometimes result in a unique taste or odor noticeable to some, but not to others. People whose water is not chlorinated claim it tastes better, “but it’s really just an interesting observation, not any type of scientific correlation. Much of how people think and feel about the taste and quality of their water is mysterious,” he admits.

Things like the type, age and condition of the infrastructure as well as the distribution system – the longer the water has to travel, the more it has to be treated – can impact taste as well. Plus, small amounts of some naturally occurring minerals improve the taste of drinking water and possibly offering some nutritional value.

Before water leaves the treatment plant, it must meet certain health criteria. Once it leaves the plant it’s monitored in order to identify – and treat – any potential problems such as water main breaks, changes in pressure or microorganism growth.

Want to know about the drinking-water quality where you live? Visit EPA.gov.