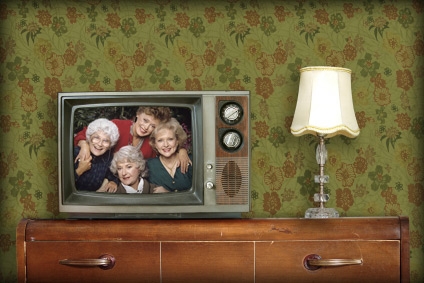 Whether you want a little piece of hard-won wisdom, or a long-winded explanation of how ferry rides used to cost a nickel, TV grandparents are there for you. Often unappreciated by fellow characters but always welcome by viewers, these small-screen patriarchs and matriarchs are frequently the heart and soul of their series. And now we’ve gathered the very best.

Some of these characters and nuanced and true-to-life; others are literally cartoons. Of course, it doesn’t mean they’re all great or even good people, but they’re fine grandparents in their own way, each and every one of them. Even Abe Simpson.

Played by: Will Geer and Ellen Corby

Multi-generational, rural, and far from affluent, the Waltons were unlike any other family on 1970s television. Setting them apart even further were Esther and Zeb Walton, the wise and rock-solid live-in grandparents.

The Walton seniors acted as advisers for their children and role models for their grandchildren, passing on their voluminous practical knowledge any which way they could. The best part? There were no ingrates in the Walton family. Everybody appreciated Zeb and Esther’s efforts.

Sadly, both Corby and Geer suffered health problems towards the end of the series. When Corby had a stroke in 1977, it was written into Esther’s storyline, though her reduced abilities meant she saw far less screen time than in previous seasons. Geer’s 1978 death from respiratory failure was also incorporated into the show, by making Esther a widow at the start of the seventh season.

In a famous first-season episode of Norman Lear’s prickly ’70s sitcom, Archie and Edith’s only child, Gloria (Sally Struthers), has a miscarriage, forcing the family to pull together and the Bunkers to mourn the loss of their first grandchild. Toward the end of the episode, Archie comforts his daughter in her bedroom with love and tenderness – qualities he rarely showed at other times.

Five seasons later, that kind side was allowed to resurface when Gloria gave birth to little Joey. While Edith was a natural with the boy, it took Archie a while to get with the program — changing diapers and singing lullabies wasn’t really his thing. But with uncharacteristic patience, Archie learned the ropes and came around, even babysitting when the situation called for it (during poker games, no less). Ultimately, he was a good grandparent by any measure, and a great grandparent compared to what might have been expected of him.

Her children and neighbors were the targets of most of Mama’s barbs, but her grandchildren, Sonja, Buzz, and Bubba, didn’t completely escape her withering put-downs, either. (Tiffany, her fourth grandchild, was born during the series finale.)

Sondra, Denise, Theo, Vanessa, and Rudy Huxtable may have been the luckiest kids on television. Not only could they claim a pair of the most beloved parents in sitcom history, their grandparents weren’t too shabby, either.

Clair’s parents, Carrie and Al Hanks, turned up once in awhile, but Cliff’s folks, Anna and Russell, were the rocks upon which the Huxtable family was built. Played by Broadway veterans Earle Hyman and Clarice Taylor, the jazz-loving couple was stable, successful, caring, and many more adjectives typically employed to describe ideal grandparents.

Additionally, as longtime civil rights activists, they gave the family, and viewers, some perspective on African-American history and social progress — something Bill Cosby believed was essential to the show.

A good dad? A sagacious grandparent? A stickler for historical accuracy?

Abe Simpson is none of these things.

But the grandfather of Bart, Lisa, and Maggie Simpson is many other things, including the de facto leader of his retirement home, a World War II veteran, a security guard at a cranberry silo, a winner at the Senior Olympics, a ’50s game show champion, an occasional cross-dresser, and an ardent writer of complaint letters.

All grandpas should be so disgruntled.

Dorothy, Rose, Blanche, and Sophia spent most days eating cheesecake and wisecracking their way through typical sitcom shenanigans. But once or twice every season, their kids and grandkids would appear, reminding viewers that each Golden Girl had a home, a job, and a family—not to mention a lot of history—before moving to Miami.

And while each G-Girl was a g-ma several times over, it was Blanche’s grandchildren who featured most heavily into the show. Conceived artificially, her baby granddaughter Aurora was the subject of a major story arc, while a visit from her teenage grandson, David, served to illustrate the strained relationship between Blanche and her children.

After Blanche learned of David’s poor home life, she phoned her daughter with a characteristically sassy scolding: “If you and Michael don’t straighten up and give that boy the love and attention he deserves, I will kick your uppity butt till hell won’t have it again.” Now that’s a good grandma.

Though Roseanne herself became a grandmother in the final season of this sitcom, Grandma Bev and Nana Mary who were the primary grandparents for most of the show’s long run.

Masterfully played by theater veteran Estelle Parsons, the ever-present Bev was a parental nightmare — high-strung, demanding, and quick to criticize her daughters, Roseanne and Jackie. However, her relationship with her grandchildren was less contentious. While they often recoiled at her tone-deaf attempts to relate, Becky, Darlene, and DJ were more than welcoming of Bev’s gifts. (We hope they sent thank-you notes.)

Less reviled was Bev’s mom, Nana Mary. The scourge of her daughter and an outspoken defender of her granddaughters, Mary appeared just once or twice a season. Still, Shelley Winters’ portrayal of this lovable, larger-than-life Bears fan was always a welcome addition to the family fracas, whether she was taking guff or dishing it out.

With ample opportunity for family gatherings and developing bonds across generations, having one’s grandparents close by can be a blessing.

That is, unless those grandparents are Marie and Frank Barone.

It’s not that their family didn’t love Frank and Marie. It’s just that they didn’t like them very much. One a world-class guilt tripper, the other, well, a world-class boor, the couple would pop in on their son, Ray, his wife, Debra, and their three children several times a day. Happily, any time spent with surly Frank and manipulative Marie was fodder for laughs. Still, couldn’t they have given it a rest? Just once?

I’m sitting here thinking I should protect my children from the truth about their grandmother on the one hand. On the other, I’m saying to myself, ‘What kind of example am I setting?’ Evading and smiling, passing out cheese puffs… over a woman that we all know was terribly dysfunctional! Who spread no cheer.

That’s Carmela Soprano (Edie Falco) talking about her mother-in-law, Livia, at Livia’s funeral. Considering the decades of emotional abuse, manipulation, and martyrdom Livia’s loved ones had to endure, the matriarch of the Soprano crime family got off easy. After all, this is the woman who once ordered a hit on her own son.

Inspired by executive producer David Chase’s mother, Livia is a masterpiece of misery—the rare television grandmother with no redeeming qualities, like affection for her grandchildren, and the only Soprano capable of causing a lifetime of pain without ever pulling a trigger.

Marchand died of lung cancer in 2000, during filming the show’s third season. Marchand said of Livia, “At my age and with my health, it’s lovely to have a meaty role like [her].”

In a world of fast-paced, bombastic cartoons, Nick Jr.’s Max and Ruby was a welcome respite. Based on Rosemary Wells’ children’s books, the peaceful series showcased brother-and-sister bunnies who found themselves in calm, toddler-appropriate situations. Their biggest supporter? Grandma, of course.

Dressed in her signature blue dress and glasses, Grandma planned all sorts of fun activities for her grandbunnies, from treasure hunts to tea parties. In return, Max and Ruby constantly invented new ways to impress her. During the series’ 52 episodes, she received glow-in-the-dark vampire teeth, a cherry Slime Dribbler drink, and a refrigerator door full of art projects.

As you might expect, Grandma was thrilled by all her gifts, and the bunnies always lived happily ever after.

Watch episodes of Max and Ruby »

While splashy shows like The Good Wife and Mad Men may hoard all the awards, NBC’s Friday Night Lights has quietly made its case as the finest hour-long drama in recent memory. Centering around a Texas high school football team, the show is defined by solid writing and nuanced performances, like that of Louanne Stephens as Grandma Saracen.

When her son is deployed to Iraq, loving and somewhat daffy Grandma is left to watch her grandson, second-string quarterback Matt Saracen. Soon, it becomes apparent that Matt is caring for Grandma as much as she is for him.

Their warm, funny, and occasionally exasperating bond hits all the right notes, and stands out as one of the most realistic relationships in a show full of them.

On one end of the TV grandma spectrum, there are the kindly, white-haired and wise ladies. On the other end are Lucille Bluth, Emily Gilmore, and Evelyn Harper—rich and imperious glam-mas as likely to bake a pie as they are to shop at Payless. Equal parts funny and nasty, they can usually be found terrorizing their spawn while sipping (okay, gulping) their third martini of the day.

However, as mercilessly tough as each is to their children, all of these 60-something matriarchs are loving grandmothers. Even Lucille Bluth, who once enlisted her son in the army without his knowledge, once admits to her teen granddaughter, Maeby, “I think you’re a lovely girl [and we] ought to spend more time together.” Of course, the underlying motive is antagonizing her daughter (Maeby’s mom), but when it comes to these ladies, we’ll trumpet any affection we can find.