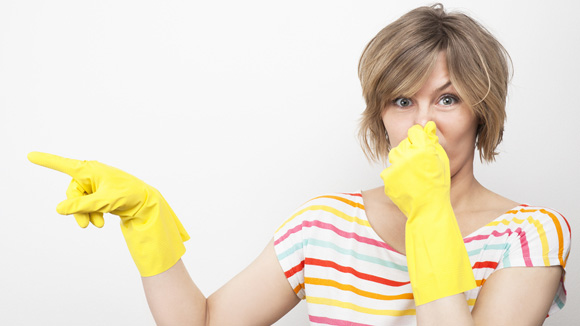 Every house has a smell. It’s a combination of the people who live there, their perfume, aftershave, the food they cook, and other things. Most of the time it’s a good smell, but sometimes, it’s really not, says cleaning expert and best-selling author Linda Cobb, aka The Queen of Clean.

What to do when your house smells bad? Read on for Cobb’s best tips.

“Even when you ask someone to smoke outside, the smoke can come into the house through open doors and stay there,” says Linda.

Her fix: Use a hand towel and pour white vinegar over it, then wring it out. “Take the towel and walk through the house swinging it in the air, like you’re rooting for your favorite team. This will get rid of the smell in no time, and it’s all-natural, so no one is breathing in chemicals,” she says.

Doggie or cat smell can be tough to get rid of because it’s constant and becomes embedded in fibers. Linda’s favorite solution for getting the smell out of the carpet and fabrics: Odorzout. “It’s 100 percent natural and animals and kids can be around it without worry,” she says. Odorzout is a dry product that you sprinkle on the affected area, and it absorbs the odor. Then you vacuum it up! “A little goes a long way and it works great,” says Linda.

As for a smelly dog, Linda says, “Believe it or not, I’ve found the thing that works best is to take a Massengill Douche (any kind except the vinegar type or medicated), put vaseline over the eye of the bottle so it won’t spray too quickly, wet down your dog, then spray the douche on him.”

Why it works? Douches deal with protein-based smells, and your dog’s fur is made up of protein. Works like a charm.

Or try this other recipe she swears by:

Mix and put into a spray bottle to leave in the bathroom.

“Do not put carrot peelings, onion peelings, or potato skins down your disposal,” says Cobb. “These can cause you to call a plumber more than any other foods, and when they start to decay they really smell.”

If the can itself smells, wash it with warm water and white vinegar. Or try sprinkling in some Odorzout, let it sit a few minutes, then dump out and rinse the can. If the garbage is smelly, but the bag isn’t full yet, Cobb suggests dumping in some coffee grounds, which neutralize smells.

Dirty clothes can stink, especially if they’re workout clothes. To make sure the smell comes out in the wash, add half a cup of Arm & Hammer Washing Soda to the laundry. “It’s not baking soda, but it’s similar, and you’ll find it in the laundry aisle,” says Cobb. “It takes the smell right out of fabrics.”

5 foods that can boost your sex drive

It’s pretty remarkable, when you think about it, that so many of us baby boomers have made it this far. Especially when you consider those extremely unsafe practices that our parents subjected us to that would be frowned upon today. 1. No car seats Mondadori/Getty Images Most of us went home from the hospital lovingly cradled in Mom’s arms as she sat in the passenger seat of the family car. Granted, Dad probably drove more cautious

It’s pretty remarkable that so many of us baby boomers have made it this far.

The Centers for Medicare & Medicaid Services (CMS) recently released the 2020 premiums and deductibles for Medicare Part A and Part B plans. Part B monthly premiums will rise about 7% for 2020. This news comes after we learned that the Social Security cost-of-living increase for next year will only raise benefits by 1.6%. 2020 Medicare Part B costs Medicare Part B is the medical insurance piece of Original Medicare. Part B covers

Part B premiums are on the rise.

Taking a daily shower is as common as drinking a cup of morning coffee and brushing your teeth, but it’s a habit that could be worth breaking, experts say. Some two-thirds of Americans shower every day. People say their daily showers help them wake up and keep them clean, especially following exercise or exertion or in hot and humid weather. Two-thirds of Americans shower every day. “When it comes to concerns about health, however,

How often should you bathe? The experts weigh in.