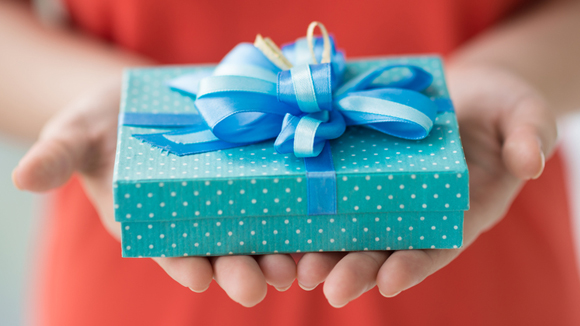 When a daughter or daughter-in-law has a baby, she gives the greatest imaginable gift: a grandchild! It has long been tradition to congratulate new parents with bouquets of flowers to brighten the hospital room or piles of paraphernalia — wrapped with shiny ribbons and dangling plastic booties — to outfit the newborn.

But more dads are now presenting mom a special post-delivery gift in the recovery room that’s just for her — what’s referred to as a push present. When Babycenter.com recently surveyed 30,000 respondents, it found that 38 percent of new moms had received a gift from their mate that was tied to the birth of their child.

The birthing gifts are meant to honor the morning sickness, nine months of pregnancy, and painful hours of labor mom endured. Given just after birth, the token, sometimes called a baby bauble, can make an exhausted woman with sweat-streaked hair feel… glamorous. Jewelry is the most popular push present going. And while dads have diamonds covered, many grandparents are following suit and showing up with sentimental — sometimes dazzling — gifts of their own!

One grandmother, Celishia Scarpone, from Point Pleasant, N.J., was way ahead of the trend. When she got a call from the hospital announcing that her first grandchild, Emma Victoria, had arrived, she grabbed her bag… and the present she had put away 30 years before. It was a christening shawl her mother had knitted by hand for the new dad, Scarpone’s son, Dan, when he was a baby.

“I wanted to see the tradition continue,” says the 57-year-old grandmother.”The blanket had been mine when I was a new mother — and I wanted to give it to my daughter-in-law, Angela, when she had just become a new mother.” Scarpone was moved by the emotional reaction her gift evoked, especially the tears that watered her son’s eyes.

All that Glitters & Glows

When Caroline Bollinger, 37, of Brooklyn, N.Y., had her second son, her mother-in-law, who lives abroad, wasn’t able to visit with mom and dad in the hours and days immediately following the delivery.

When she later made the trip to meet her new grandson for the first time, she came bearing gifts for him… and for mom. She gave Bollinger a beautiful handcrafted gold and sapphire necklace that had been specially wrapped for her. “I was totally surprised,” says Bollinger. “It’s so luxurious!”

Something sparkly is a no-fail gift idea for a new mom. “It counteracts all of the plastic stuff you get for the baby,” says Bollinger. Of course, anything you pick out for the new mom in your family, to make her feel appreciated, is sure to go over well.

“Always think about the recipient when selecting that special something,” says Jodi R. R. Smith, president of Mannersmith, a Boston-based etiquette consulting company. “All gifts carry messages that could be misinterpreted, especially in a post-delivery, hormone-induced state.”

While one woman might be overjoyed with a gift certificate for a mommy-and-me spa day that includes babysitting for the infant, another might see it as a thinly-concealed suggestion that she should take better care of her appearance.

“It’s all about knowing who you’re giving the gift to,” says Smith. If there’s any chance your generous gesture could be misperceived, she says, clearly explain your intention in a card.

For example, a note could read, “I know you’re an impeccable housekeeper — and I also know how time-consuming a newborn is — so to keep up with your high standards, Merry Maids will come in for the next four weeks to clean your home. So you can spend more time with that lovable baby of yours!”

If you know your daughter or daughter-in-law’s personal, slightly-out-of-reach passions, you can’t go wrong by indulging them. Alicia Biedermann, 27, of Modesto, Calif., developed a taste for Coach handbags when she started graduate school. “They’re really durable. You can throw them around, carry them through rainstorms, and they’ll still look good,” she says.

After she got pregnant, though, a new Coach bag seemed an unnecessary expense. “My husband and I really pulled the purse straps in because there were a lot of things we needed to upgrade before the baby came, including our too-small condo and the car I’d had since high school,” says Biedermann. She registered for a more modest diaper bag.

Her dad had another idea. He bought her a signature brown Coach diaper bag.

“It was so unexpected,” says Biedermann. “It made me cry!”

The bag has come in handy. “I take it everywhere,” she says. “It doesn’t look like a diaper bag, so I use it all the time for everything. I never swap it out!”

She explains, “Once you have a kid you only think about buying what they need.”

When your grandchild is born, you’ll surely supply diapers, onesies, adorable teensy shoes, and other things the baby will need. “All that cute stuff disappears,” says Bollinger. For your grandbaby’s mom, consider something that will last a little longer. “I think I’ll have this necklace forever,” says Bollinger. “Maybe I can give it to my daughter-in-law one day.”