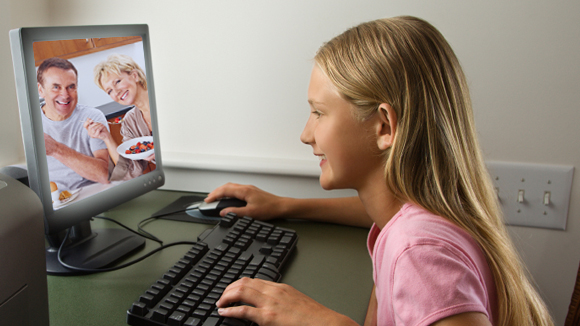 Whether you live a couple of hours’ drive or a plane ride away, it can be hard to feel like you’re truly ‘in’ on your family’s daily doings. But there are some unique ways to connect that not only help you feel like you’re grandparent of the year, but are also key to your overall health. “Research has shown that the more social connections you have, the happier you are and the less stressed you’ll be with your life situations,” says Sharon Gilchrest O’Neill, a family therapist in Mt. Kisco, New York. In addition, spending time with a grandchild bonds the two of you as well as the family as a whole. From crafting to charity work, these six ideas are sure to prompt some excitement for both you and your grandchild.

Idea #1: Engage in some long-distance doodling.

If you live too far away to drop in on your grandchild for some after-school coloring, consider this: All you need is an Internet connection, a Google email account (gmail), a webcam on your computer and a visit to Scoot & Doodle on Hangouts. Voilå—you can instantly start sketching face-to-face with your grandkids. “We’ve used Scoot & Doodle to create new designs or just play tic-tac-toe,” says Alida K. Newlin, a grandmother of three who lives in San Francisco. “We all remember the fun things we did with our grandparents and this is one new way to create those kinds of memories using the Internet.”

Marie Phillips has never forgotten the helpful money tips her parents once shared with her. So, when her grandchildren were old enough to appreciate it (they’re now four and seven), this Kansas City, Missouri, grandmother coined the concept of ‘Grandma Money Camp’ to teach them all the things they need to know to be fiscally prudent. Beginning last summer, Phillips, who lives a few hundred miles from her grandkids, invited her grandchildren for a week of fun and money talk. Included in the line-up: Listening to money-themed songs, reading books about saving money and playing store. The trio even planned and ran a one-day car wash before the week ended. Phillips’ tip: Pick something you’d like to ‘teach’ your grandkids—it’ll be more fun that way. “This summer we’re going to our condo at a nearby lake and we’ll do camp again,” she says. “We’re going to explore some local businesses and even get a tour of one of them. We might even set up a lemonade stand!”

Young adult literature might not be your number-one choice, but by reading books your older grandkids’ are interested in, you’ll find a unique way to feel attached to them. Elaine Fantle Shimberg, who lives in Tampa, Florida, reads books her grandkids are reading, then discusses the book with them over the phone or via Skype. “I recently read The Hunger Games and had lively discussions with four of my grandkids about this book,” she says. “Sometimes we agree; often we don’t and they defend their position very well. It makes for great conversation and kids often talk more openly to their grandparents than their parents.”

Idea #4: Build something together.

If you’re a thousand miles away from your grandchild, you may need to get inventive about time spent together. Such was the case for Irv Weisser, who lives in Seattle. “I only saw my seven-and-a-half year old granddaughter a couple of times a year and I wanted to make those visits as meaningful as possible,” says Weisser of his granddaughter who lives in Woodland Hills, California. So he started sending items that he could build with her. “I shipped an unassembled solid oak wagon to her when she was younger and then built it before her eyes when I arrived a few days later.” Recently, Weisser decided to invite his granddaughter to join him in repairing a bench his son had put outside. “Doing things together helps us our relationship immensely,” he says.

Idea #5. Capture memories in a sketchbook.

Instead of gathering memories in a journal, Judy Osborne, a grandmother of four, decided to purchase an artists’ sketchbook that she’d work on with each of the boys. “I take their copy with me whenever I fly out to visit them,” she says. “I take markers and, when they were little, I took stickers as well. We draw together and we date the page.” This art-together project works best when grandkids are between the ages of three and 10. “The boys each have at least two books now.” Osborne says. And she always takes the books home with her, promising to give the boys their books when they turn 21. “They love to look back over each page!”

Idea #6: Star in your own fairy tale, or read one.

Anyone can read a fairy tale to a grandchild but having you both star in one was a must-do for Karen Gilbert, who created a MyFairyTaleBooks with her four-year-old granddaughter. “We personalized it and used both of our names as main characters,” she says. “We get a kick out of reading it together when I visit, and I know that her parents read it to her at bed time when she misses me.” Another idea: Record a favorite story for your grandchildren at A Story Before Bed. Once it’s recorded, your grandchild can listen to it as much as he or she wants.

It’s pretty remarkable, when you think about it, that so many of us baby boomers have made it this far. Especially when you consider those extremely unsafe practices that our parents subjected us to that would be frowned upon today. 1. No car seats Mondadori/Getty Images Most of us went home from the hospital lovingly cradled in Mom’s arms as she sat in the passenger seat of the family car. Granted, Dad probably drove more cautious

It’s pretty remarkable that so many of us baby boomers have made it this far.

The Centers for Medicare & Medicaid Services (CMS) recently released the 2020 premiums and deductibles for Medicare Part A and Part B plans. Part B monthly premiums will rise about 7% for 2020. This news comes after we learned that the Social Security cost-of-living increase for next year will only raise benefits by 1.6%. 2020 Medicare Part B costs Medicare Part B is the medical insurance piece of Original Medicare. Part B covers

Part B premiums are on the rise.

Taking a daily shower is as common as drinking a cup of morning coffee and brushing your teeth, but it’s a habit that could be worth breaking, experts say. Some two-thirds of Americans shower every day. People say their daily showers help them wake up and keep them clean, especially following exercise or exertion or in hot and humid weather. Two-thirds of Americans shower every day. “When it comes to concerns about health, however,

How often should you bathe? The experts weigh in.