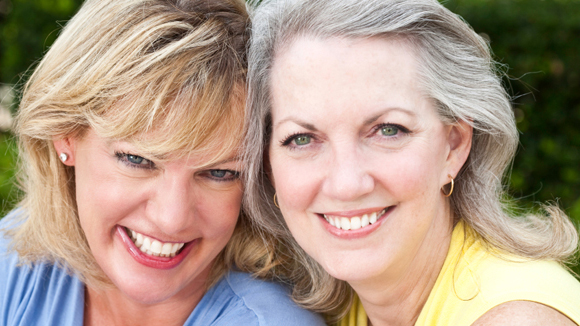 Being the mother-in-law is the hot-button subject paternal grandmothers tend to dwell on — and I’m no exception. I included essays on the subject in Eye of My Heart. I’ve written columns on Grandparents.com about feeling left out as a result of my in-law status.

Obviously, I’m not alone. With more than 1,400 members, Mothers-in-Law Anonymous is the largest, juiciest discussion group we’ve got going. Clearly, many in our ranks feel excluded and disenfranchised.

Still, I wonder: What about grandmothers on the maternal side? Do they really have it so much better than we do? Are they spared walking on eggshells around their adult daughters? Is their access to the grandkids as freewheeling as those of us with in-law after the word mother imagine? In other words, are the old myths really true?

The answer is yes — and no. To borrow the title from a recent movie, like everything else related to grandparenthood, it’s complicated. Here’s why.

Myth No. 1: Maternal grandmothers have easier access to grandkids than their in-law counterparts.

Well, maybe … sometimes. But there are many mitigating factors. Geography, in our very fluid society, is one. “Despite the wonders of Skype, I’m less close to my daughter’s family in California than her in-laws are,” says Martha Horne, a retired social worker and grandmother of seven who teaches a course in grandparenting at the Osher Lifelong Learning Institute in Washington, D.C. “Regular contact is very important to children as they are growing up.” And though Horne is grateful that her daughter’s in-laws are on the scene and able to help out, she wishes she could see her grandkids on the west coast more often. “Each grandchild is unique,” she says.

Sanity and family dysfunction are also key. Even nanas who live in the same burg as their daughters may not enjoy an open-door policy when it comes to the grandkids. This is true of my friend Lily, whose daughter-in-law barely speaks to her mother, whom she considers borderline psychotic. Instead, she confides in Lily. Which brings us to….

Myth No. 2: Daughters rely on their mothers for advice and emotional support.
and
Myth No. 3: Maternal grandmothers don’t feel left out.

In both cases … sometimes. It all depends on the relationship between mother and daughter. For some daughters, becoming a parent can trigger old issues with their mothers. In Eye of My Heart, Jill Nelson writes: “Whatever the reasons, my daughter and I … are stuck refighting tired battles. As much as I would like what binds me to my grandson to be simple and clear, the connection between us gets tangled up between my daughter and me. My love for my grandson roils what I thought — or wished — had been resolved, forgotten, or forgiven.”

And even though many daughters get along well with their mothers, they frequently consider Mom’s views on child-rearing obsolete. Instead, this younger generation of mothers tends to depend on their friends, as well as the staggeringly abundant information now available online.

Myth No. 4: Maternal grandmothers don’t have to walk on eggshells.

Not! If you are a grandparent — maternal or paternal — who never bites your tongue, never says the opposite of what you really mean, never pretends to approve when you don’t, or never in any way tiptoes around your highly sensitive adult children, please contact me at once. I want to learn from you!

Julie Bondanza, a Washington, D.C., psychologist and maternal grandmother  explains, “Unless you witness child abuse or some other drastic situation that puts your grandchildren in peril, criticizing your daughter’s parenting style will only make her defensive. Tact, respect, and letting go of the small stuff will result in a much healthier relationship.”

Myth No. 5: Maternal grandmothers are kept in the loop by their daughters.

Again, many are — but many others are not. Take my friend Alice, whose daughter refuses to speak to her. Alice depends on secret phone calls from her son-in-law to fill her in on the activities of the two grandchildren she adores but rarely sees because of a strained relationship with her daughter.

Geography plays a role here, too. The grandparents who live closest or are most involved with the kids generally are more in the know, regardless of which side of the family they’re on.

And, as impossible as this may seem, there are some maternal grandmothers who take little or no interest in their grandkids’ triumphs and tribulations. These grandmas are out of the loop because they choose to be.

Finally, although paternal grandmothers may have to work harder to establish trust with their daughters-in-law in order to stay in the loop, the trust between mothers and daughters may be broken already by the time grandchildren come along.

When I started writing this column, I thought I had very little to bring to the subject, since I’m the mother of an adult son. And then I realized that even though I’ll never be a grandmother on the maternal side, I am a daughter. Not only did I not enjoy a close relationship with my own mother while growing up, before my son, Clay, was born I moved 3,000 miles away from her and my father. Products of the Great Depression, they seemed to disapprove of every parental move that I — a spirited child of the 60s — made. It wasn’t until after Clay became a father himself that my mother congratulated me for having raised such a kind and wonderful son.

Barbara Grahami s the editor of the anthology, Eye of My Heart: 27 Writers Reveal the Hidden Pleasures and Perils of Being a Grandmother (Harper), which tells “the whole crazy, complicated truth about being a grandmother in today’s world.”