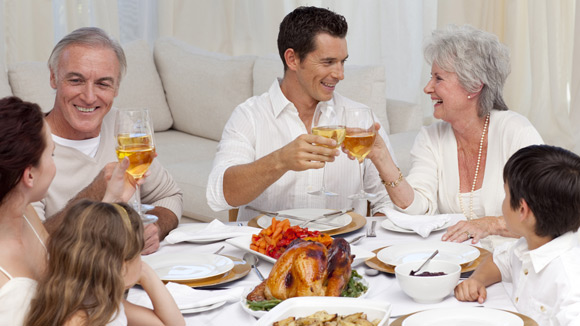 Your daughter chose him, and he’s the father of your precious grandchildren. Often times, the relationship between in-laws and their son-in-law works out great and you couldn’t be happier. But sometimes, it just doesn’t click.

“When a man marries into a family it can be tricky,” says Ruth Nemzoff, resident scholar at Brandeis University’s Women’s Studies Research Center and author of Don’t Roll Your Eyes: Making In-Laws Into Family. “Often there’s the expectation that he is part of the family, but he hasn’t had all the years together that his wife has. He hasn’t had all that time of unconditional love—fighting and making up.”

The relationship can be especially difficult for mothers, who often rely on their daughters for advice and support and find themselves without that support when the daughter marries.

“Ultimately you want to build a foundation,” says Dr. Nemzoff. “So that when a crisis hits, you and your son-in-law have enough good experiences in the bank that you’re there to support each other.” How to do that? Read on for ways to get—and stay—close to your son-in-law.

Welcome your son-in-law with open arms

That sounds obvious, but many mothers resist a wholehearted embrace. If you accept that he’s the man your daughter has chosen, and respect that, you should be able to reach out and treat him as a valued addition to the family.

Part of that embrace includes discouraging your daughter from bad-mouthing her husband to you (except when she faces a serious problem).

If your daughter gripes to you about her husband’s unfinished chores or inconsistent interest in personal hygiene, she’s bound to bias your view of him. Hear her out if you like, but then just advise, “Talk to him about it, honey.”

Likewise his view of you can be biased. Dr. Nemzoff points out that your son-in-law mostly knows you through your daughter’s eyes. Much of what he learns about you comes through your daughter’s filter. “He only knows a small amount about you. Over the years, as he gets to know you, he will grow to see you as an individual, while also supporting his wife when there is conflict.”

Often, a mother-in-law has her own blueprint for what her daughter’s life should be like when she marries, says Elizabeth Berger, author of Raising Kids with Character. But the mother’s plan may not match her son-in-law’s—or her daughter’s.

A mother-in-law might assume that choices she disapproves of come from the son-in-law, when the opposite is the case. Jumping to conclusions and meddling can backfire, so avoid the temptation and trust that your daughter will make sound decisions without outside managing.

Leave your daughter in charge of trying to change him

Keep whatever differences you may have with her husband in perspective. Don’t overlook his good qualities while getting hung up on one flaw, such as a tendency to be late, or his gaining a few pounds.

Above all, avoid the temptation to criticize. It could turn both spouses against you.

If it works, great. If he’s uncomfortable, stop. “If you like to hug and kiss, but he doesn’t like it, use words instead of actions to tell him how happy you are to see him,” she says.

And if you don’t like the way your son-in-law treats your daughter? Examine your reaction first to make sure you’re not making something out of nothing. Then ask yourself if your daughter is happy.

“Ask your daughter how she feels,” says Dr. Nemzoff. “Your job is not to cause trouble in the marriage, it’s to be as supportive as possible and bring out the best in everyone.”

However, she cautions, if there is abuse involved, you absolutely need to step in.

Don’t compete for your daughter’s attention

Such a rivalry can be painful for the person you both love. Instead, realize that you and your son-in-law have separate relationships with your daughter that are distinct and need not threaten each other.

The husband’s partnership with his wife is based on marital love; yours, on filial devotion. Understand how much your daughter values each and how happy having both makes her.

If the only time a mother-in-law and son-in-law see each other is with the daughter, children, or other relatives around, you may never get the opportunity to really get to know each other.

Find some time to be alone together—a lunch during the work week, or a joint night of babysitting while your daughter is away on business. If that isn’t possible, make it a point to spend one-on-one time talking or doing an activity when you’re all together.

The goal is to get to know each other better and share in experiences. And remember, no relationship, no matter who it is with, is ever smooth-sailing 100 percent of the time.