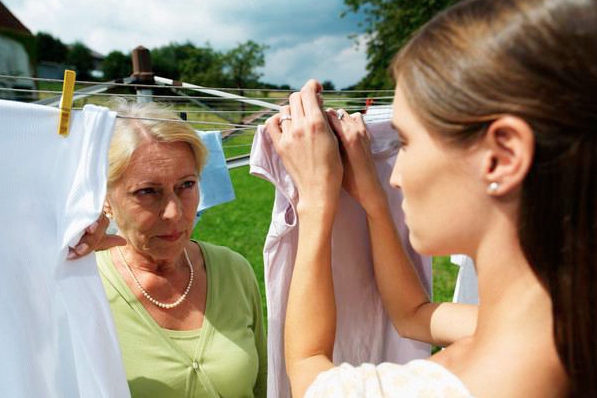 Elaine is still puzzled by the whole thing. It felt strange, she says, it blew her mind. The Pennsylvania schoolteacher saw her son, Sean, and his girlfriend, Miranda, at least once a week. During one visit, with little fanfare, she learned the two were engaged.

“I saw this beautiful diamond just tossed on the bathroom counter. She never showed us the ring. There was no ‘Look, Sean gave me a ring!’ or ‘Guess what? We’re engaged!’,” says Elaine. “Was she not proud to be engaged to him? Was she afraid to tell us?” When Miranda decided she didn’t want an engagement announcement – or a bridal shower – Elaine was dumbfounded.

Later, after having shelled out $5,000 for wedding photos, Elaine wondered why they were stowed away. “She had snapshots of everyone in her family hanging on those walls. Why weren’t there any of the wedding couple? Did she not want to be reminded?” Elaine admits she’s since stopped trying to figure her daughter-in-law out.

It’s one of the thorniest relationships. But, the mother-in-law, daughter-in-law struggle is no new source of family tension. For years, the sagas have provided endless material for stand-up comedians, not to mention a running stream of book ideas for sociologists and relationship experts alike. Still, one can’t help but wonder: Why do so many men easily slip into new relationships after a marriage, while so many women set up battlegrounds?

Women are still the “primary keepers of the family” points out Deborah Merrill, Ph.D., associate professor of sociology at Clark University who wrote Mother-in-Law and Daughter-in-Law: Understanding the Relationship and What Makes Them Friends or Foes (Praeger Publishers). And, a large part of most women’s identity depends on the family unit, says Merrill.

When a couple weds, family structures gain complexity. “Marriage is a bigger change than families are prepared for. As parents, we understand when they [children] go away to college or leave the house.” When most adult children marry, though, they’re likely already thriving on their own. So, on the surface, a child’s tying the knot suggests only a small shift in the parents/child bond.

Oh, but it’s not. The union spawns a new relationship triangle and forces a redefinition of both the son/mother and the man/woman relationship. Underestimating the scope of this transition may be the first misstep on the road to forging a solid in-law bond.

When your son took his bride’s hand, maybe you saw this as a daughter-in-law joining your family. By doing so, though, a mother may fail to recognize that her son and daughter-in-law are forming a second, distinct family unit. To make the in-law relationship work, each woman should respect the other’s family unit instead of fighting to dominate. What’s key, says mother-in-law Annie Chapman, who wrote The Mother-in-Law Dance: Can Two Women Love the Same Man and Still Get Along? (Harvest House Publishers), is flexibility. “As the mother-in-law, you’ll have opportunities to be either pitiful or adaptable. When holidays are being divided, for my son’s sake, I choose to be flexible.”

Indeed, holidays tend to be a flash point for most families. Ni, a mother with two married sons, can relate. “I explained that I wouldn’t feel alienated if the kids chose to spend the holiday anywhere they pleased and join us after,” she says. But when that turned into them not visiting at all, says Ni, “that hurt.”

Though it was hard – even painful, as she bit down on her tongue – Ni fought the urge to turn her children’s disappointing choice into a confrontation. Instead, she let it go. “Being from a service family, I’m aware that even short visits through the years can create loving, lasting bonds.” Ni decided it wasn’t the timing, as much as the quality of visits, that mattered most.

Adding a grandchild to the mix may further complicate the in-law equation. While Baby’s arrival may pull a mother- and daughter-in-law closer together; on the flip side, it may deepen the divide, and at worst, topple the relationship. Unsolicited advice is one hot button. Post-birth, grandmothers issue it in avalanche-form to new mothers. When that well-meaning advice is not followed, or is criticized, hurt feelings – often unannounced – result.

Amy, a mother who lives in Pennsylvania, hasn’t forgotten one such sticky situation. “My mother-in-law was totally uneducated about nursing. She thought that since my son was hungry all the time, he wasn’t getting enough milk,” says Amy. “So at the ripe age of six weeks, she put him on her kitchen table in his bouncy seat and proceeded to mix up rice cereal and stuff it in his little mouth. He didn’t even know how to swallow at that time.”

As Amy sees it, Grandma should withhold advice (and rice cereal) until asked. Thumbing through Mom’s parenting books, she says, might have been a better port of entry into parental advising. As Grandma sees it, she was just trying to help. And, Mom should accept that there are myriad ways to care for a child. When feeling the urge to criticize, Mom may ask herself, “Is there anything wrong with how my mother-in-law is burping, feeding, or calming my baby…other than the fact that it’s not the way I do it?”

Even toys, those fun things with which you play, can be a source of contention in this tug-of-war. The issues? Educational value, expense, quantity. Younger parents may focus on toys labeled educational and dismiss grandparent-given toys as ‘useless’. But, all types of toys can further child development on some level. Parents, and grandparents, would do well to keep that in mind.

When Elaine opened her daughter-in-law’s closet and found it stacked high with toys she couldn’t help but blurt out, “Why so many?” The response came as a surprise: Guilt. Because she and her husband were working long hours, her daughter-in-law just kept buying more toys for her son. This left Elaine wondering, “Is that quality-time – giving him toys so he can occupy himself?” Elaine also questioned the once-a-week visits to their house she was making to iron, wipe the floors, and wash the clothes with the intention of giving the parents more time to spend with their two children after work.

Where are the men?

Hiding — literally and figuratively. Most women complain that their husbands won’t become involved in their struggles. Fathers-in-law seem to develop healthy relationships with daughters-in-law despite growing discord between the women. And, a son frequently stops short of confronting his mother about her actions, even though privately he may agree with his wife. While this may be the case, both Merrill and Chapman agree that a woman’s biggest mistake can be asking her husband to choose between his mother and his wife. In fact, ultimatums by either generation tend to backfire.

Happy families can exist. Mother- and daughter-in-law may find it easier to respect each other’s separate families if they become friends as individuals (apart from the men and grandchildren). If you can look on your new family member as a friend, it will be more difficult to turn her into an adversary. Another factor? How you decide to address problems. Overlooking small slights or addressing issues in a positive way can improve the relationship. Mother- and daughter-in-law jokes can be just that if you care enough to nurture the bond – meant to make you laugh out loud.