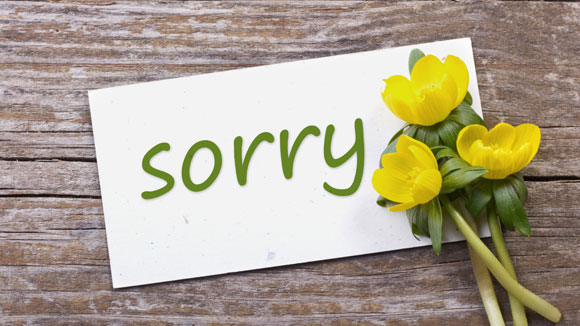 When *Jenny’s mother-in-law showed up at her home ready to spend the day with her 3-year-old granddaughter, Jenny just about fell to the floor. Jenny planned a family day—and the plans didn’t include any surprise visitors of the related kind. Why didn’t her mother-in-law understand? Jenny had texted her days ago that this weekend wasn’t good. It’s like Dear MIL ignores whatever Jenny says.

Sound familiar? Ever guilty of saying sorry for dropping by as you’re walking through your son’s front door and your daughter-in-law’s rolling her eyes? Does an apology even cut it?

Why apologizing is so hard

“If the relationship between you and your daughter-in-law is really solid then oftentimes an apology will do—as long as the actions that caused the hurt feelings stop,” says Deanna Brann, Ph.D., author of Reluctantly Related: Secrets to Getting Along With Your Mother-In-Law or Daughter-In-Law. “But when the relationship is more tentative, rarely is an apology enough.

“With mother-in-laws and daughter-in-laws, the miscommunication and misconceptions are greater, so it doesn’t feel right to apologize if you feel you’ve been misunderstood or misperceived,” says Dr. Brann. You or your daughter-in-law may say, “I didn’t do what she said I did,” and it’s hard to apologize if you truly don’t believe you did what the other person is accusing you of. “Add the fact that this relationship is something neither of you chose—it’s by marriage, an artificial relationship—and you have a competitive component occurring between you two for the influence over your son and her husband. This tension underlies everything, making it harder for MILs and DILs to apologize.”

What your daughter-in-law really wants is for you to understand her emotional hurt or pain, says Dr. Brann. If she tells you she’s upset about a behavior that you keep doing over and over, an apology isn’t enough because she’s not going to trust or believe that the behavior won’t happen again. “At this point it’s more about wanting to feel heard and less about an apology.”

Before you apologize, it’s important that you let your DIL tell you how your actions have affected her. She wants to know if you really get how she feels. Here’s your action plan:

If you know you’ve crossed a line or imposed in a big way, all is not lost. You can mend your relationship with your daughter-in-law, says Ruth Nemzoff, Ed.D., resident scholar at Brandeis Women’s Studies Research Center, and author of Don’t Roll Your Eyes: Making In-Laws Into Family and Don’t Bite Your Tongue: How to Foster Rewarding Relationships with Your Adult Children.

You follow your apology with: “What can I do to help you forgive me?” In some cases a nice gesture “peace offering” like a hot meal or a tropical plant can be added, but only if the apology is sincere. Sometimes forgiveness doesn’t come or there is more that you need to do to salvage the relationship. “You’ll need to be contrite and each time you’re with your grandchild and ask the mother’s permission before you act,” says Nemzoff. “Apologies will need to be followed by behavior change to demonstrate that you are truly sorry.”

Depending on the situation, it’s possible to remedy the relationship by offering something more, perhaps a gift, flowers, free babysitting hours or a weekend trip away, says Nemzoff, but first, trust must be reestablished. “It’s easy for grandparents to justify their actions—”I was only trying to help”—but it’s wise to remember that in our society, your daughter-in-law’s in charge of her children since she’s the one responsible 24/7.”

When you just don’t want to apologize

And what if you feel you can’t bring yourself to apologize, or you fear your apology will be met with a nasty response? That’s okay. Do it any way. “No one is so perfect to not have to apologize,” says Nemzoff. “If your apology is rebuffed, you can say, ‘I hope someday you will be able to forgive me,’ and she may eventually see your interaction in a new light.”