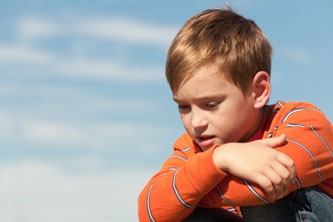 “Grandpa is going to live with the dinosaurs! He is in that box,” said the three-and-a-half-year-old at her grandfather’s funeral. She, her twin sister, and their father had flown across the country two days earlier so they could be there at the end. During those two days, the twins played with their cousins – picking wild flowers to bring to their grandfather, jumping on the bed to hug him, kissing his hand, and then running out to play. The adults and older children in the family found the young children’s presence and participation natural and helpful – three generations surrounded the grandfather in his final hours. He smiled, waved to them, and blew kisses until his final sleep.

Children are much more aware of death than adults realize – from the media, their peers, and from the experience of the death of pets and others. And so they need their parents and grandparents to answer their questions honestly. If a child asks, “Grandma, are you going to die?” you can reply, “Someday, but we never know when, and I will always be in your heart.”

Adults often shy away from talking to children about the subject or even taking them to visit sick relatives. Child development specialists, however, suggest that children need to visit sick relatives as much as possible. Communicating via Skype, Facebook, or email are also viable options if children live far from their extended families.

There is great diversity in the styles, roles, and involvement of grandparents, but the mental-health literature is unanimous about the value of the connection children have with them. Children are eager to hear stories – over and over again – about when their parents were children, and while they may have difficulty imagining their grandparents as having ever been young, they relish those stories, too. Kids like to draw pictures to accompany the stories, and they love looking at videos and family photos.

Even when children pick up on tensions between their parents and grandparents, they sense that they have a different relationship with their grandparents than their parents do. Grandparents can enjoy and relate to their grandchildren without the stresses and pressures they faced as parents. So it behooves everyone involved to nurture these special relationships. Parents sometimes feel resentment that their children are getting the type of attention they would have liked as children, but hopefully, they can appreciate what the grandparents have to offer to their kids.

In today’s world, there are diverse family structures – divorced, blended, single-parent, grandparent-led, gay and lesbian, interfaith, interracial, and international families are all prevalent. Children may have multiple sets of parents and grandparents, and maintaining connections can be difficult, especially when there are different value systems that cannot co-exist respectfully. This diversity can be enriching for everyone if grandparents lead with their hearts, agree to disagree, and accept different lifestyles. Actually, grandchildren often are instrumental in healing family differences.

As families move through the life cycle, illness and death are inevitable. Thanks to modern medical advances, people diagnosed with terminal illnesses may go on living for many years, contrary to what people could expect even a decade ago. When a grandparent or other family member becomes ill, it’s an opportunity to work through old resentments and unfinished business, to unite in arranging for medical care, caretaking, estate planning, and other end-of-life issues, with the patient’s full participation.

When a grandparent receives a terminal diagnosis, it is important for parents and grandparents to prepare children for the realities of illness – what is going to happen and how it will impact other family members. Adults often hesitate to bring children in the loop. They think they are protecting kids when, in fact, they are protecting themselves, and, sensing this, children may not ask the questions that are important to them. But the truth is usually less scary than children’s imaginations. Let kids express their feelings. Let them feel they’re contributing by doing small chores to help when visiting ailing grandparents or other relatives. They may want to draw pictures, bake cookies, or just curl up and tell or hear a story.

A role for children

As the end approaches, children need to have the opportunity to participate in family grieving and to say “goodbye.” If the family member facing death is not able to have a child visit, or does not want to, other adults should explain, “Grandpa is too sick to have company today. You can play out here while I go and visit with him.”

It is important to prepare children for funerals and related family rituals in advance. Kids really do benefit from attending funerals and other celebrations of life. Some will want to speak about the lost grandparent at a funeral, or pay tribute by singing or playing an instrument, and, if at all possible, those wishes should be accommodated.

Hopefully, other family members will continue to remember and celebrate the memories of the lost relative over the years. Some families plant a memorial tree or shrub and encourage children to tend it. Holidays and family gatherings will have a different dynamic, but the lost grandparent is likely to be etched into the child’s memory and become a critical part of his or her development.

Many of the people I interviewed for my book told me they wished that their own families had included them more in their grandparents’ final illnesses during their childhoods. One recent widow, whose husband lived with a terminal illness for three years, said, “My grandchildren helped my husband die a peaceful death, and I will always cherish their participation in his final days.”

Barbara Okun, Ph.D., is a professor of counseling psychology at Northeastern University and a clinical instructor at Harvard Medical School. She is also the co-author, with Joseph Nowinski, Ph.D., of Saying Goodbye: How Families Can Find Renewal Through Loss (Penguin). Learn more about the book here.