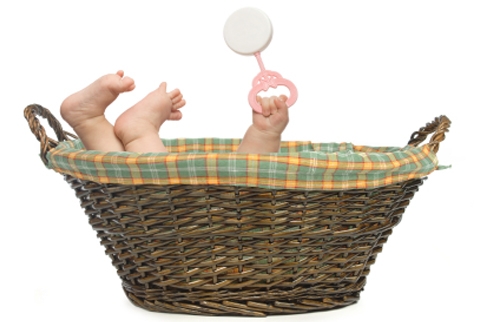 Timothea Alderman found out by e-mail. Under the subject line “I have to talk to you,” Alderman’s 18-year-old daughter, Jamie, wrote that she was expecting a baby in three months.

“I didn’t know how it was going to work,” Alderman recalls. “I was worried about her future and the baby’s. I was scared for her to raise the baby by herself.”

The weeks following were hard on the family. During a period when expectant grandparents help decorate nurseries and throw baby showers, Alderman was supporting her daughter’s flip-flopping resolutions to keep her baby or go the adoption route. She wondered what would become of the college education and medical career she had envisioned for Jamie, and what she might have done differently to prevent her daughter from becoming a teen parent, just as she had been 19 years earlier.

While facing these unknowns, the family received support from an unexpected source: their friends in Round Rock, Tex., a city named one of the best communities for young people by America’s Promise Alliance because of its commitment to education.

“It was the hardest time of my life,” says Timothea Alderman. “But every time I went to the salon my mom owns, people seemed happy. I’m thinking, Maybe I should be excited. People’s reactions were surprising to me. That’s what made me feel kind of strange because I thought, Why am I so worried about this?”

On March 5, 2008, two hours after she gave birth, Jamie decided to keep her daughter and named her Ava. At 39 years of age, Timothea Alderman became a grandmother, nine years earlier than the national average, according to a 2002 AARP study that found the average age of a first-time grandparent in the United States is 48. Ava, she says, is a “gift from God.”

The complex combination of Timothea Alderman’s reaction and that of her friends and neighbors suggests that attitudes toward teen pregnancy are undergoing a clear shift in the United States. Subsequently, those entering grandparenthood unexpectedly at a young age may be unprepared compared with their older counterparts. On the flipside, these young grandparents will have more time to enjoy the rewards of the next generation.

There is no doubt that the barrage of media coverage of 16-year-old pregnant actor Jamie Lynn Spears brought teen pregnancy to America’s kitchen table. The viewing world watched the Zoey 101 teen-idol blossom underneath a cocoon of sweatshirts, and emerge nine months later as a 17-year-old woman. When Spears declared in OK! magazine that “Being a mom is the best feeling in the world,” the mere words “teen pregnancy” lost their scarlet-letter feel.

Suddenly, the nation’s relationship with the famous teen had viewers feeling like they personally knew her and her family. Before the baby was born in June of this year, grandmother Lynne Spears (already a famous grandma to daughter Britney’s two sons) shouldered much of the blame for her youngest daughter’s pregnancy. “As a mother, don’t we always blame ourselves?” Lynne Spears said on the Today show recently.

Soon after Spears’s public pregnancy, Alaska Governor Sarah Palin, Republican candidate for vice president, announced that her unmarried, 17-year-old daughter Bristol Palin, is expecting a baby. Historian Rickie Solinger is the author of Pregnancy and Power: A Short History of Reproductive Politics in America, (New York University Press, 2005). Solinger calls teen pregnancy “a prism on America in the way that gender, race, and class get played out.” Solinger says Bristol Palin’s pregnancy is an “opportunity to talk against abortion, about religion, the glories of motherhood, and the strength of family.” Sarah Palin and her husband, Todd Palin, continue to express solidarity in their daughter’s choice.

“We’re proud of Bristol’s decision to have her baby and even prouder to become grandparents,” the Palins said in a statement.

Today, pregnant teens are unlikely to be whisked away to ride out their pregnancies in homes for unwed mothers as they did in years past. “Now you see a lot more mainstreaming,” says Wendy Luttrell, a Harvard University professor. Luttrell is the author of Pregnant Bodies, Fertile Minds: Gender, Race and the Schooling of Pregnant Teens, (Routledge, 2003). She points to the passing of Title IX of the Education Amendments of 1972 as a milestone in securing equal rights for pregnant teens in schools that receive federal funding — it officially became illegal to expel pregnant teens from school.

Day-care facilites are a common solution to keeping pregnant teens in school, a population with a 60 percent dropout rate when the pregnancy occurs before the age of 18, according to the National Campaign to Prevent Teen Pregnancy. In Massachusetts’s Gloucester High School, where 17 girls were pregnant at the end of the last school year, Time magazine reported that moms pushing baby strollers roamed the halls on their way to and from an on-site day-care program designed to allow the teen moms to complete their education. Critics say the school’s casual atmosphere made teen pregnancy too culturally acceptable to impressionable young girls. Gloucester High School administrators and the superintendent declined to comment for this article or on the statistics of its day-care program.

For the first time since 1991, the birthrate for females ages 15 to 17 rose three percent between 2005 and 2006, according to a study by the Centers for Disease Control and Prevention, going from 133,191 to 138,920. There is much debate over the reason for the notable increase, some blaming abstinence-only education, others wondering if it is simply an anomaly, and still others surmising that the nation has developed a relaxed attitude toward teen pregnancy. Pro-choice analysts say that schools, like Gloucester High School, end their sex-education program too early. Gloucester’s ends in the ninth grade, the result of budget cuts, and the high school health center does not distribute contraception.

“It is shameful that the United States has one of the highest rates of teen pregnancy in the industrialized world,” says Diane Quest, a spokesperson for Planned Parenthood Federation of America. “This is a public health-care crisis that could be prevented if we provided teens with the tools they need to make responsible choices about their life and health — we must stop wasting money on failed abstinence-only programs and start focusing on comprehensive sexual- education programs that are proven to work.”

The National Right to Life Committee did not respond to repeated requests for an interview.

Jamie Alderman pushed her way past becoming another statistic. Even though she dropped out of high school, she took evening classes to earn her diploma. Now Jamie is a receptionist at her grandmother’s salon, and she and Ava live with her parents.The joys of the expanded family have been another surprise for the Aldermans.

“Ava is the reason we wake up in the morning,” says Grandma Alderman.

But not all grandparents embrace the upheaval of teen pregnancy.

At 35, Tammy O. was launching her natural hair and skincare products line, planning her own wedding, moving into a new home in West Virginia, and looking forward to giving her 17-year-old daughter Maya siblings. Then Maya told her she was pregnant and due to give birth this December. It is a situation not unlike that of Governor Palin’s.

“I thought I would be an older woman, perhaps in her 60s. I would maybe have some gray, be retired,” says Tammy O., who requested that last names be withheld to maintain the family’s privacy.

Instead of being able to help her grandchildren by paying for their college education and offering her time to them, Tammy feels unprepared for this next step. She and her husband will help Maya, but will not assume the financial burden of their grandchild. Tammy suggests Maya get child support or government assistance. For the 35-year-old grandmother, her focus will remain on having a baby with her new husband.

“It took a while, but I came to the realization that I guess my daughter will affect my life some, but it doesn’t have to alter my life plan … When the baby comes, I want to be called ‘Mimi.’ I am not in a ‘Grandma’ mood.”

To embrace or to support at an arm’s length? Either way, family experts say that teen pregnancy is not going away.

“In an ideal world, children are born into a family where they are welcomed with open arms by two loving parents who are fully prepared to take on the responsibilty for their care,” says Susan Stiffelman, a family therapist and Grandparents.com advice columnist . “This leaves room for the grandparents to wholeheartedly embrace the arrival of their new grandchild without concern about being in both the parent or grandparent role, either emotionally or financially.”

Adds Stiffelman: “But when the ideal isn’t happening, the village around this newborn baby — whomever that may be — needs to rally and come together as best they can.”