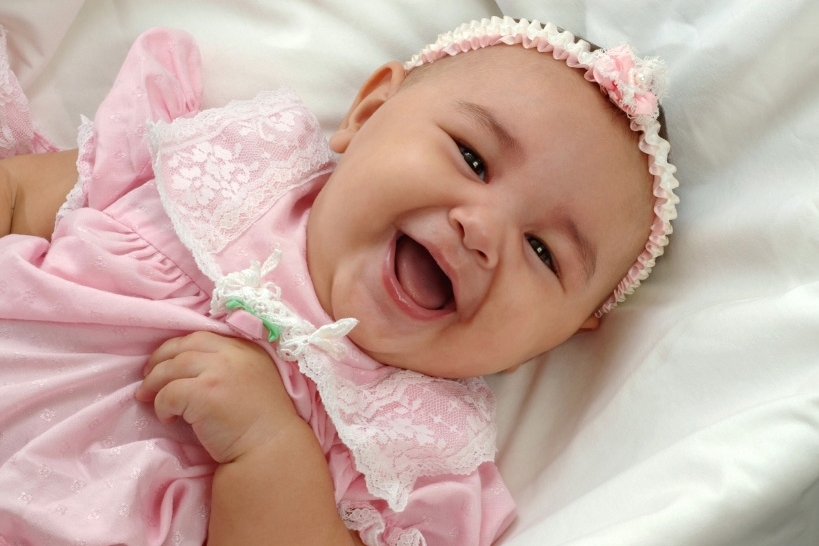 In Navajo tradition, it’s the exuberance of a baby’s first laugh that triggers a ceremony. Just make sure it’s a giggle, not a gurgle — and be sure there’s a witness. According to lore, whoever elicits that laugh not only will be the one the baby takes after, but the one who generously hosts the celebration. At the first laugh ceremony the baby (guided by adults) offers rock salt and sweets to guests in a symbolic gesture said to set him on the path to a generous life.

Welcoming ceremonies for newborn babies come in many forms: baptism, bris and namings just to name a few. Regardless of the culture, faith or ritual, there’s one universal theme that prevails: the joy your new grandbaby brings to his or her community.

Primarily, these traditional rituals carry religious significance. But for the increasing number of long-distance families, they take on a secondary purpose — bringing family members from far and wide together to meet Baby for the first time. In this way, the rites symbolize both an introduction to religion and to family.

What is your role?

Each ceremony includes special roles for people the parents hope will place prominently in their baby’s life. Godparents are those chosen by parents to sponsor a Christian baptism. They accept the responsibility to informally guide the child spiritually and care for him or her if orphaned. In the Jewish bris, it’s the kvatar/kvatterin, chosen by parents, who takes the child from the mother to where the circumcision takes place, and the sandek holds the baby during the ceremony.

Thing is, grandparents aren’t usually chosen to fill these parts. Grandparents, though, can be honored in other ways. “Some people believe that the soul rests when a child is named after a person who died. So, when my granddaughter was named after my husband and my grandson was named after my father, it was a very happy time,” says Sheila Levine, from New York, of her grandchildren’s Hebrew naming ceremonies.

Even though you may not be called on to fulfill an official post during the ceremony, you fill an imperative role that no one else can: that of grandparent! And, the welcoming ceremony can provide an opportunity for you to decide what kind of grandparent you’d like to be. Since your newborn grandchild won’t remember this day, focus your grandparenting on two things: supporting the baby’s parents and creating a lasting family memory.

Your involvement can also go beyond the actual ceremony and celebration. Julie Luedtke from Holly Springs, N.C., fondly remembers an important role her mother, Betty Gill, filled before her son’s christening. “My mom and I went shopping together for Sean’s baptism outfit. I think we must have looked at every white suit before deciding on ‘the one’.” Grandmother Sheila can relate. She remembers how happy she was to buy her first grandchild, Katie Laura, a beautiful outfit to wear to the synagogue for her naming ceremony.

As a new grandparent, what you don’t do is as important as what you do. Don’t play the “always” card — the first-born is always named after his paternal grandfather; we always have the celebration at the country club; the baby always wears the same frilly gown. Yes, it’s true. Your family may always do these things. But this is a new family — and they may want to start traditions of their own. Embrace them gracefully.

Recognize that for parents, especially those united through an inter-faith marriage, choosing the religion in which to raise their child is a difficult, thoughtful decision. If your faith isn’t the one that’s been selected, whatever you do, don’t boycott the ceremony in word or deed.

Remember that for your grandchild, an ongoing relationship with a spiritual guide may be more important than the house of worship he attends. Your adult children will appreciate your being open and accepting of an unfamiliar religion.

Through words, actions or a sentimental gift, you, as a grandparent, can give the new family a memory to look back on and treasure through the years. You can share something with the parents that no one else can — memories of their own welcoming ceremonies.

“We certainly reminisced that our daughter’s christening was on a freezing December day in Pennsylvania, and laughed that her brother’s ended up being on a summer’s day in Connecticut,” says Massachusetts grandmother Betty Gill about the christening of her daughter Julie’s first child.

A gift — small or large — that has special significance will mean the most to the new parents, and eventually your grandchild. It could be something that symbolizes your ethnicity, family identity, religion or wishes for your grandchild. Betty and her husband saw the gifts they gave as not only being from them, she says, but also from their daughter’s deceased grandparents, who had gained great strength from their spiritual beliefs.

“Walt and I gave our grandson Sean a small Miraculous Medal to wear on his outfit and a cross to hang over his crib,” says Betty. “We wanted to somehow represent our parents, Sean’s great-grandparents.”

Another way to give the parents a gift, one they likely wouldn’t ask for, is to offer to pitch in and help cover the cost of the post-ceremony celebration. The offer to share the financial burden is often appreciated by new parents.

Shelia hosted the Kiddish (a traditional ceremony of wine and cake for a temple congregation) after the bris and naming ceremonies for her grandchildren, she says, as well as the party held later at the parents’ home. And Baby Sean’s grandparents hosted the lunch that followed his christening. “My husband and I were able to and wanted to do this, and that was OK with our daughter and son-in-law,” says Betty.

One mother’s final musings seem to define a grandparent’s ultimate purpose: Love — boundless, endless, unconditional love. “The ceremony gave me the confidence that the love surrounding Sean on that one day will always be a part of his life,” says Julie. “The day just wouldn’t have been complete without our son’s Mom-mom and Papa there.”