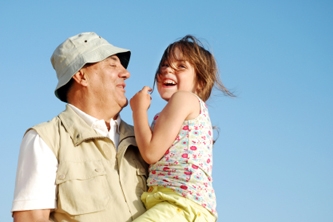 Lorin Barber is the author of a wise and witty new guide to grandfathering, 28 Tips to Become a Great Grandpa (Bonneville, 2011). In honor of Father’s Day, he’s sharing six of his tips with Considerable.com. Read on, and happy Father’s Day!

I know that knowledge can be taught, but I’ve always wondered if wisdom can only be gained. I’ve concluded that it can be taught, but mainly by example. Fortunately, grandpas are all-wise — just ask us! We can play that role by setting an example and being close by when a child is in need.

Grandpas, when a child needs a listening ear, listen. After you’ve listened for an hour or so, a child may be open to a single sentence of your wisdom. Never make the mistake of trying to impart any more than that. It will be lost. And teaching wisdom doesn’t mean correcting. That is seldom a Grandpa’s place. When necessary, a quick “don’t do that” should suffice. I wasted many a word with my own kids trying to explain why some behavior is unacceptable.

Issues of right and wrong can and should be discussed, but it is much more effective when done in a quiet moment, after the storm has passed. An experience from your own life would be helpful in such a situation. If you ever made a similar mistake, let them know, then let them know how you learned to avoid making it again. If you never made that mistake, tell them of someone who did. If you can invent a whopper with a horrendous outcome, so much the better.

2. Get the kids outdoors

Kids seldom play outside anymore. Whenever possible, get your grandkids out of the house, away from the TV, the computer, and the Wii. When we were kids we just got the neighbors together and played in the backyard. When you have the kids over, take them out in your yard and play wiffle ball, dodge ball, tag, or kick-the-can like you used to.

If you camp or hike, take the grandkids with you. Short hikes are okay, even just to the Dairy Queen, and camping is great even in the backyard. Climb a tree or a rock with the kids, or at least give them a boost up and ooh and aah about how high they are. Walk along a stream. Skip rocks on a lake. Get them swimming in something other than a chlorinated pool. Gaze at the night sky. Find the Big Dipper. Count shooting stars. Contemplate the universe and God and man together.

Take your grandkids on vacation and show them what mountains, forests, and seas look like. But don’t just get somewhere, experience the journey. Drive them from coast to coast or clear across Montana or Texas where they can experience wide-open spaces. Show them what nature has to offer.

3. Get them involved in sports

Kids may love to play sports or they may hate it. You may hate sports, too. But they still merit some exposure.

Kids from kindergarten up today only play “organized” sports. But organized leagues take no childhood initiative. As a kid, I was the neighborhood organizer. I would go from house to house seeing who was available for football or baseball, so I had to develop my promotional skills.

Another problem with organized sports is that too many kids learn too early that they’re no good. It took me a long time to get over imagining hitting a winning home run or catching a touchdown pass because I played no organized sports until I was at least 10. Later, I attended basketball practice for one of my kids when he was in kindergarten, only to hear the coach tell the other kids not to pass the ball to him. He didn’t want the ball going to the least-skilled player. That incident got me into coaching.

There may be no better option to organized sports for your grandkids — they shouldn’t be left out of modern society, after all. But you can become involved: Take them to games and practices yourself. Cheer loudly. Coach if you’re able. Definitely spring for ice cream afterward.

And teach sports history. Show the kids a picture of yourself in your tight-fitting basketball shorts. Tell them about your heroics. Let them know who Babe Ruth and Wilt Chamberlain were. I once saw an interview with an old man who had played basketball for James Naismith, the inventor of the game. When asked what had been the greatest change in the sport, he said it was the addition of the dribble. I still laugh at that. I would never have guessed basketball was once played without dribbling.

I moved recently, and the experience reinforced a lesson I’d learned earlier: A picture is worthless until it’s seen.

I carried out boxes full of pictures, journals, notebooks, speeches, career mementos, and many other treasures. I realized my grandkids would never see these things until I was dead and my kids sorted through my stuff — that is, unless I did something about it.

I’m no pack rat. Aside from my photos, there are maybe three boxes of stuff I’d like to keep. But what good are they if no one ever opens them? I’m not saying you should litter your home with trinkets. Some grandparents overdo it and are accused (by people like me) of hoarding.

Display the things you are proud of or that impart a vision of the past — a plaque, a collage of medals, a painting, anything of yours that you’d like your grandkids to see. Keep photo abums available on a prominent bookshelf or a coffee table. Your children will most assuredly look through an album featuring them, and grandkids will want to see old pictures of their parents. An album featuring grandpa and grandma as youngsters will be of special interest. Don’t wait. If you don’t display, you’ll die depreciated.

When grandchildren are old enough (typically around 2 months) you should begin to impart your views on politics. If their parents’ ideas differ from yours, do it quietly or out of range, but if the entire family is in agreement, feel free to harp away on any news item, politician, or unwanted tax (are there any wanted ones?).

Let yourself become known as a grandpa with strong opinions, but not a stick-in-the mud. I tell the grandkids that I have the right to complain about taxes, but I still pay them. I tell them we have an obligation to our nation to be honest and to be supportive of its laws, but that we also have methods in place to make changes when we feel it necessary.

It’s okay for grandkids to know you have strong feelings on current events. Involvement in politics is patriotic. I’m no activist, and I’ve never run for office. But I always vote.

Every family should have a made-up language of its own, and grandpa can be the main source. In our family, squeet has replaced let’s go eat, and squate means I already ate. A grown-up has become a dolt instead of an adult. Come up with your own crazy words and phrases. They’ll make you unique. They’ll help you overcome your temper. Best of all, they’ll make you immortal as your words are passed down from generation to generation.

Many families also have phrases parents use to see their children off to school, or off to dates, such as Remember who you are, meaning don’t do anything to disgrace your family. Wanting to be original, but not having the intellect to come up with something more profound, I always said to my kids, Don’t hit anybody. This phrase has become the standard for my grandkids, too. Unfortunately, on days the car got wrecked or someone got into a fight, the kids reminded me that I’d not said it that day.