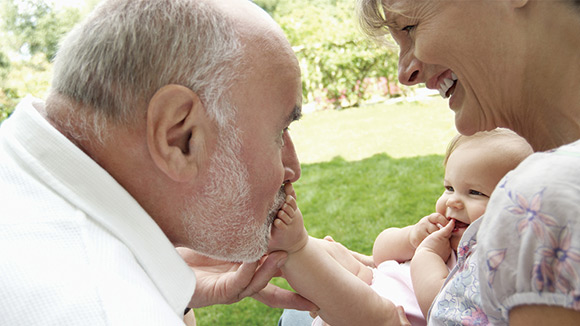 It takes nine months to have a baby, and that may be a good thing because many couples need at least that long to ponder, discuss, debate, argue, agonize, and finally, agree on their child’s name.

What moms- and dads-to-be may not realize is that similar, equally weighty debates are going on in the homes of their parents, about what the future grandparents want their grandchildren to call them. “This generation of grandparents takes the whole naming process more seriously than ever,” notes Lin Wellford, coauthor of the forthcoming The New Grandparents Name Book: A Lighthearted Guide to Picking the Perfect Grandparent Name (ArtStone). After all, she asks, “How many times in your life do you get to name yourself?”

New grandparents today are also younger than ever — according to the U.S. Census, first-time grandparents are, on average, 47 — and many don’t want names that make them feel old. “I wanted a name that sounded as young as I feel,” says Wellford, 57, of Ozark, Ark. She’s known as Mimi to her two grandchildren.

Certainly, some choose an old standby like Grandma or Grandpa, Papa or Nana. Others take a name from their cultural heritage. And others, when their children ask, agree to let kids call them whatever their own parents were called. On the other hand, “You can choose a name and lobby for it, but there’s no guarantee that you’re going to end up with it,” Wellford says. “I’ve heard more stories where the grandchild comes up with a name that may be a mangled, funny version of what he or she hears — nothing that the grandparent would have ever thought of in a million years — but they fall in love with it and that’s that.”

That’s how Deana Barr, 65, of North Fort Myers, Fla., came to be Gabadoo to her four grandsons. “When my grandson, Aaron, was younger he had trouble saying Grandma and he pronounced it Gaba,” she says. “One day we were cuddling and I asked him, ‘Who loves you?’ and he answered, ‘Gaba do!’ So I became Gabadoo or just Gaba. I love it because it’s different and it sets me apart.”

Similarly, when Anita Bryce’s first grandchild, Megan, was little, she sometimes got confused between her two Grannies. The girl’s mother tried to simplify things. One Christmas, as Megan opened her gifts, she was told, “This gift is from your grandma with the curly hair,” says Bryce, 58, now a grandmother of seven in Vernon, Fla. “It was probably because I had Dolly Parton hair at that time.” Sure enough, she says, “a couple of hours later I walked into the house and was greeted with a big hug and salutation of Curly Grandma!

“Believe me, I had reservations about that name,” she says. “But seven grandkids later, listening to the kids pronounce Curly Grandma throughout their toddler years has been a hoot! I have been Curly Grandma, Turdy Drama, CrrGrr, DumDum, and Telly Dama. Eventually they all get to Curly Grandma, but the couple of years it takes to master that name is absolutely fun!”

Barbara Winter’s first grandchild came up with an innovative solution for distinguishing between her two grandmothers. “When she turned two, I moved to Las Vegas to be closer to her,” says Winter, now 66 and a grandmother of two. “Never in my wildest dreams did I, a longtime Midwesterner, think I’d be called Grandma Vegas. But I am and I love it. My granddaughter’s other grandmother is known as Grandma Texas, so we’re kind of a built-in geography lesson.”

Many families have naming traditions for grandparents. If precedence dictates that you be “Grandma Kate,” but that just doesn’t work for you, speak up and offer other suggestions. Some grandparents merge their name and title — Anne becoming Anniegram, for example, or Marilyn becoming Gramarilyn. Kids may also discover innovative ways to adapt your name. At first, “My grandkids didn’t know what to call me,” says Kitty Chimbel, a grandmother of five in Torrington, Conn. Her first grandkids started calling her Nanny, but that quickly evolved into Nanny Meow, because of her name. She still goes by the name today.

When Harry Rosen’s first grandson arrived in November, the 57-year-old dentist in Pittsford, N.Y., declared that he wanted to be known as Grand Dude. “It’s a little different and distinctive and it has a touch of silliness,” Rosen says. But he concedes that it’s entirely possible that grandchildren being who they are, his plan could backfire and he’ll become known as Grand Dud. “I can live with that,” he says. “They can call me anything they want — as long as they call me!”