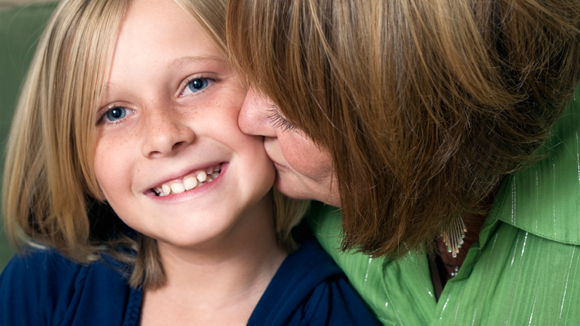 Years have passed. And yet, bitterness remains. Sure, Julia Burke was a child. But, her eyes were wide open every time her grandmother handed her $10, her sister $10, and her cousin $20 as a gift.

“She thought if her other granddaughter was an only child, she should get more,” says Julia. With each incident, the girls’ mother grew more incensed until finally confronting Grandma to request the girls get equal gift amounts — or nothing at all. Nowadays, Julia, herself a grandmother of five from Nevada, is guided by those memories. “I make sure money gifts to my grandchildren are always equal.”

Kids can see favoritism in “anything and everything, even complaining if a sibling is handed the first pickle from the jar,” says Linda Sonna, Ph.D., author of The Everything Parent’s Guide to Raising Siblings: Tips to Eliminate Rivalry, Avoid Favoritism, and Keep the Peace (Adams Media Corporation). Showing partiality — by touting one grandchild’s accomplishments or consistently inviting the same grandchild to outings — whether intentional or not can sabotage a grandparent-grandchild bond.

And, to whom do grandchildren complain about getting short shrift? Parents — who may end up harboring feelings of anger. Left unaddressed, years of built-up resentment can expand into a chasm too wide to cross. If your grandchildren’s parents approach you with concern, take it seriously, says Sonna. Parents who suspect blatant favoritism are not above minimizing contact with grandchildren to protect a child they believe is being hurt by unfair treatment.

It’s natural to feel closer to one grandchild than to another based on shared interests. “Some personalities just click more easily than others. That’s as true of grandchildren as it is of acquaintances,” says Suzette Haden Elgin, Ph.D., a grandmother of 12 who wrote The Grandmother Principles (Abbeville Press).

But, although you’re under no obligation to feel an equal affection for each grandchild, she says, you are obligated to keep your preferences to yourself. Awareness is key to short-circuiting behavior that is perceived negatively as playing favorites. Take an honest account of the relationship you have with each grandchild. Ask adult children point-blank: “Am I playing favorites?” No matter how delicately you approach the subject, some slings and arrows may come your way. There’s too much at stake, though, to worry about bruised egos.

A less-favored grandchild can experience emotional hurt. When a grandparent showers more attention on one grandchild’s stellar report card or soccer trophy, this can crush the spirit of the grandchild who, no matter how hard he or she tries, can’t boast similar triumphs, says Charles Sophy, a board-certified specialist in child and adolescent psychiatry and family practice. This, says Sophy, may lead children to ask parents or secretly wonder, “What’s wrong with me?”

Kids are people, too

Sure, some favorites have it good…and they know it. “I was my grandfather’s favorite,” says Charlie Shaw, from Allentown, Pa. “Probably because I was the first-born. Whenever he went somewhere, I was the one he took along.” But as Charlie awaits the birth of his second grandchild, he says he’ll do all he can to avoid showing this type of preferential treatment.

Because, as Judy Hill, now a grandmother of four from New Jersey, knows, a golden grandchild can pay a high price. As her grandmother’s obvious chosen one, she was picked on by jealous sisters. “It made me uncomfortable and I tried to discourage it,” says Judy. “My younger sisters felt left out. They resented my getting special treatment and would gang up on me.” When the sisters talk about it now, “my grandmother is not remembered in a good light,” says Judy. That’s not the legacy she plans to leave. Her childhood experience makes her highly aware of how she treats her grandchildren. Says Judy, “I really monitor myself.”

Seemingly innocent actions may inadvertently lead grandchildren – or their parents – to suspect favoritism. Here are unintentional mishaps to look out for.

If you’ve been accused of favoring one grandchild over another and open discussion with your family isn’t an option, take it upon yourself to start anew. Carve out one-on-one time with each grandchild. And, when you’re spending alone time with a grandchild, praise the one you’re with! Make it your goal to have each grandchild feel the same amount of warmth from that shining light of your love.