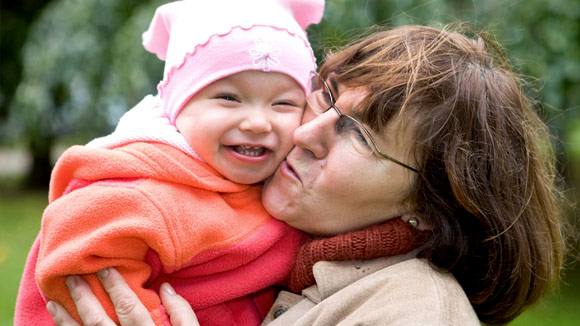 You’re never quite prepared for the feelings that your first grandchild’s birth inspires. Even an experienced pediatric nurse like Mary Schoenberg, 57, of Basking Ridge, N.J., was surprised by how much joy the arrival brought her, and how quickly: “You won’t know how wonderful it is until it happens. All of a sudden you feel a rush of emotion, and they are yours forever.”

As a pediatrician, I’ve seen magical connections form between grandparents and their grandchildren again and again. But what promotes such a strong bond across generations? And what happens when a grandparent has trouble establishing that connection?

Bonding between infants and their caretakers is a much-studied, but still mysterious, process. Traditionally, most of the research has focused on the connection between a mother and her baby, as it was believed that an infant had to form an attachment to one primary person in order to develop securely. More recent studies, however, indicate that this is not necessarily true. In fact, infants are not only capable of forming attachments to multiple caregivers, says Sharon Ryan Montgomery, a clinical child psychologist, but they may reap some developmental benefits from these multiple attachments. The initial bond that forms between grandparents and grandchildren, certainly, can be beneficial, powerful, and long-lasting.

Like Schoenberg, who is now the grandmother of four, many people experience elation upon hearing about the birth of a first grandchild. But for others, feelings are more complicated. Gerri Perkins, 61, of Chatham, N.J., a recent first-time grandmother, kept the ultrasound image of her first grandchild on her refrigerator, but says, “Even though I was excited, I did not really feel great emotion until the baby was born. And even then, it was not the immediate rush of feeling that I had with my own children.” She described it more as a strong sense of responsibility and caring. “I knew this little person was going to be in my life forever,” she says.

Montgomery, herself a grandmother of three, says the feeling that a grandchild’s birth is somewhat less emotional than one expected is normal. “It’s not the same as with your own children because you are a generation removed and you have some perspective as well as experience,” she says.

How attached grandparents eventually become to new grandchildren can vary greatly, even within families. Factors such as how many grandchildren one has, how far away they live, and how often they visit, all play a part. And while they’re no substitute for holding a child in your arms, baby Web pages, parent blogs, and Web cams can help grandparents connect to long-distance newborns. For example, Schoenberg, whose four grandchildren live in Iowa, preserves a collection of their messages on her answering machine.

According to Montgomery, the bond is most dependent on how involved grandparents are in their grandchildren’s lives. For grandparents who may be having trouble feeling a bond with a child, the best advice may be to find your own way to connect. “It’s important to feel needed,” says Perkins’ husband, Dan. “Gerri was helping with breastfeeding, and I wondered what skill set I had to offer.” The answer came to Dan, a craftsman, when he saw a playhouse in the parking lot of a home-supply store. “I decided right there that I would build a playhouse for each of my grandchildren. I would build them with my own hands.”

For some grandparents, bonding with an adopted child, or with stepchildren, poses different challenges. In his second marriage, Mitch Rouzie, 59, of Staten Island, N.Y., suddenly found himself a grandfather of three and initially he was ambivalent. “It was daunting at first,” he says, “but I see my relationship growing with the children now.” Today, he imagines a bright future with his new grandchildren. “I see myself being there for them, someone they will come to for advice, someone to have fun with.”

Maintaining the bond with a grandchild can be difficult, as you try to balance your own desire to be with the child with the needs of the new parents. Dan Perkins, 62, says that he and Gerri try not to visit too often. “It’s difficult to stay away, but we want to be helpful and supportive and not be disruptive.”

As children grow, of course, relationships change. In my own practice, I have seen many older children who are very attached to their grandparents. These trusted adults offer a shelter in the storm as teens face new stresses, as well as perspectives that may be different from their parents’. “It’s like having all the love but much less of the daily responsibility,” Schoenberg says. “And it’s unconditional love. It’s different from being a parent. We can be there for them in a different way. I love it!”

So when you first gaze into the eyes of a newborn grandchild, or offer a finger for the infant to grasp, remember that the magic of bonding begins right at that moment and that it can truly be the start of a lifelong relationship.