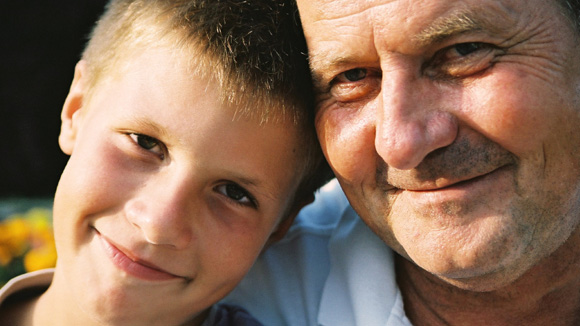 Your grandchildren know you love them. After all, you tell them over and over again and you shower them with gifts, goodies, and affection.

But how do they show you? Is it hugs and kisses? The way they run down the driveway when you arrive for a visit? Or the cute nicknames they give you?

“It doesn’t take too much to make a grandparent feel special; grandchildren make their grandparents feel special from the minute they’re born,” says Robin Hewitt, 51, of Mayodan, N.C., grandmother of five and coauthor of The Joyous Gift of Grandparenting: 101 Practical Ideas & Meaningful Activities to Share Your Love (Hatherleigh). “You don’t need to give us flowers or candy on Valentine’s Day; just a hug and a kiss will work, and maybe a handmade card. It’s the little things that make us smile.”

What a picture’s worth

Refrigerators nationwide are covered with crayon-heart-filled cards and drawings like the ones that Agi Neumann’s two granddaughters send her. “My two granddaughters are always making me cards and they keep getting better and better at it,” says Neumann, 76, of Cranford, N.J. One year, the girls gave her a handmade, bead-and-rhinestone-covered box for the holidays, which she still keeps in a place of honor in her living room. Why? “Because my two granddaughters made it and I know it must have taken a lot of time,” she says. “They looked so proud when they presented it to me, waiting for the oohs and ahhs. And did I ever ooh and ahh! The workmanship is beautiful and so is the love behind it.”

Other kids find ingenious ways to present grandparents with tokens of their love. One of Laura Ann Brewer’s ten grandchildren “goes around the house and wraps up ‘things’ and gives them to me,” says Brewer, 62, of Montague, N.J. “I say, ‘Oh, how beautiful. For me?’ and he smiles like he just gave me gold nuggets.” Another grandchild “picks the flowers from my Christmas cactus and brings them to me and says, ‘Look, Nana! I got beautiful flowers for you,’” she says. “And the 2-year-old just last week put her hand in the fish tank, took out a colorful rock, brought it to me and said, ‘Nana, look! A rock for you.’ What can I do except laugh and say, ‘Thank you so much!’”

Grandparents used to be their grandchildren’s best pen pals, but these days you can’t expect love letters via the daily mail. Instead, sentiments come across the internet or as text messages. Marlene Kaiser, 75, of Orem, Utah, says she knows her 17 grandkids love her when they read and comment on her blogs. And Adele Zasloff, 75, a grandmother of one in New Jersey, sensed her grandson’s love when he sent her a special invitation. “I was invited to be on Sam’s Facebook page,” she says. “I take it as a real compliment. After all, I was invited to enter his world. That’s real love.”

When Pam Rogers, 56, a grandmother of three in Canyon Country, Cal., lost her hair to chemotherapy, her 10-year-old grandson told her she was “still the most beautiful Grammy in the world,” and her 8-year-old granddaughter decided to cut her own long, blonde hair and donate it to Locks of Love, the organization that collects hair to make into wigs for cancer patients. “She knew I would not get her hair but that if she could help another person that was okay with her,” Rogers says. “She made me a very proud grandma.”

“And every time she saw me she would grab my head and kiss my bald dome all over to make my hair grow faster,” Rogers adds. “I cry now just thinking about it. You get what you give in this life and I can’t give enough. I am as rich as a queen.”

And then there are the gifts neither asked for nor expected, small gestures that are remembered forever. Sue Ellen Cooper, 64, a grandmother of two in Fullerton, Cal., was recently watching TV with her almost three-year-old granddaughter. “I quietly reached over and clasped her little hand. She was so absorbed in Sleeping Beauty that I didn’t think she had even noticed,” Cooper says. “A couple of minutes later, she turned her face up to mine and said, ‘I love it when you hold my hand, Grandma.’”