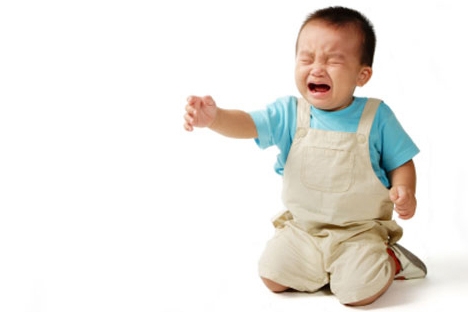 You’ve seen it before: A minor conflict, a misplaced toy, a denied snack, or a tough loss in a board game sends your grandchild into an all-out temper tantrum. You know the kind: crying, screaming, stomping, and maybe even hitting or kicking. But when parents aren’t around, and you’re caring for the kids, how can you defuse the situation?

Why they act out

Remember that tantrums are a normal, even healthy, part of growing up for many young children, especially toddlers. Young kids are eager to assert their independence, and usually you and their parents have encouraged and rewarded them for that. So when something disrupts their plans or you hold them back, whether for their own safety or because of house rules, it’s frustrating for them. The kids can’t understand why you would want to stop them from doing what they want, and they lack the words or the self-control to debate the point with you, so they lash out.

The American Academy of Pediatrics advises that you think of tantrums as “performances” in which your grandchildren are “acting” out to persuade you to give in to their demands. For this reason, the academy’s primary recommendation is to “eliminate the audience.” Either walk away from upset children (as long as they aren’t acting in such a way that they could hurt themselves or their siblings) or, if you’re away from home, quickly remove them from crowds.

The tantrums your grandchildren throw for you probably aren’t their first. So before you babysit, ask their parents how they respond to tantrums. Then follow the parents’ example as much as possible, says Karen Knudsen of San Diego, who teaches parents and grandparents about child development. It’s better for children to receive consistent messages from different adults. And, of course, parents may have already hit on the best method to calm their children, whether it’s a favorite song or video, or another distraction. Also, knowing as much as possible about how your adult children “parent” their children can help you avoid tantrums in the first place. For example, if they always let their children choose their own clothes, your insistence that a child wear your choices could set off a meltdown.

What to expect and how to react

* For toddlers. Two-to-three-year-old grandchildren can have tantrums that last from two minutes to an hour, Knudsen says. She advises removing children from the room and putting them in a safe, quiet place. (If they hit, kick, or bite you or one of their siblings, however, give them a time-out immediately, if that’s the parents’ usual response to violent behavior.) Check on the kids frequently until they are calm; let them know that you are aware that they’re upset and that when they are finished with their tantrum, you can talk with them. When the children are calm, talk to them about why they were upset, making clear that their response was not the best choice, but not dwelling on the point.

* For older kids. When grandchildren are four or older, Knudsen says, you should have higher expectations. These kids know the rules of their house, and the consequences for breaking the rules. If they get upset because they can’t do or have something they want, remind them of their parents’ rules. Then, if a tantrum continues, offer them clear choices as a way to help them find a way out of their tantrum and calm down. For example, tell a child, in a calm tone, “You can choose to stop your behavior now, and you’ll still have time to play, or you can continue your behavior and not have time to do the things you want to do.”

After a tantrum, try to engage the child in problem-solving. “How could you have handled this differently?” you might ask, or, “What could you have done instead of hitting your brother?” Remember, whenever you talk about discipline with your grandchildren, don’t make it personal. Instead of telling them how upset you are with them, emphasize the importance of their parents’ rules, and how those rules are really meant to help them.

When tantrums are severe

It’s tempting to try to reason with a child in the midst of a tantrum. “Don’t you understand that this will not get you what you want?” you might want to ask or, “Why don’t you calm down so we can talk?” But it’s not that simple. Sometimes, all you can do is wait out the tantrum or, at best, distract a child out of it.

“When our grandchildren melt down, we may no longer be dealing with a rational person as emotions may have literally ‘hijacked’ the rest of the brain,” says Dr. Jed Baker, a clinical psychologist. Baker is the author of No More Meltdowns: Strategies for Managing and Preventing Out-of-Control Behavior (Future Horizons). “At this point, reasoning may be useless. Instead, try soothing or distracting them with hugs, stuffed animals, a pacifier, a snack, a favored toy, or new sights or activities.”

Stick to your guns

Above all, remember that simply giving in to a tantrum and letting children do or have what they want is not helpful. It teaches them that screaming and misbehaving will get them what they want – and the tantrums will keep coming. Yelling at children as they have tantrums doesn’t help, either; it only increases their stress. Instead, calmly tell them that you will speak to them when the tantrum is over. It’s a good way to maintain your authority, says Robin VanBibber, 59, a grandmother of six in El Cajon, Calif.: “It comforts the child to know that I am still there, but that I am also not accepting inappropriate behavior such as a huge tantrum.”

When a tantrum disintegrates into a meltdown and you’ve already tried everything that is consistent with the parents’ standards of discipline, try again, and stay firm, consistent and, calm. Even if you have to put children in repeated time-outs, know that you are still doing what’s best for them, and keeping your loving relationship intact. As Knudsen says, all temper tantrums have an end and coming down from them is always easier for children if the adults they are with have remained calm and positive.

Tantrums are an unpleasant part of growing up for young children, but they can still be seen as a positive step in their maturing and socialization. If you handle them correctly, your grandchildren won’t see you as “the bad guy,” but will feel secure with the steadiness you offer them, which is a way that you communicate your love for them.