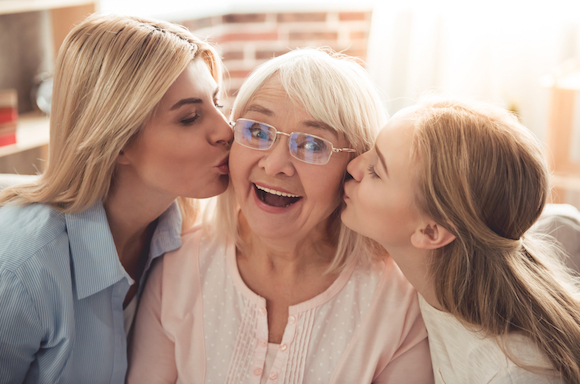 On the one hand, it was so simple. There was a new baby, Isabelle Eva, and there was nothing to do except love her. That was the one hand. The other hand, belonging to her parents, held all the cards. I soon learned that I could love my granddaughter fiercely, but I had no say — in anything. She was mine, but not mine. Although this is perfectly natural and should not have shocked me, it did. (Okay, I admit that on occasion the word bossy has been used to describe my behavior. Still.) For many parents used to being in charge, deferring to the rules and wishes of our adult children and their partners is humbling. I ended up editing a book on the subject  to help me get a handle on my new role. Here are a few guidelines that — so far — have kept me out of hot water.

1. Seal your lips. Even if you’re an expert who has written 13 bestsellers on parenthood, your adult sons and daughters will assume you know nothing about childrearing. Your advice and opinions will not be welcome, unless directly solicited. (Even then, it’s iffy as to whether the new parents really want to hear your answer.) Tread lightly. As Anne Roiphe laments in Eye of My Heart, “Ah, my poor tongue is sore from being bitten.”

2. You may love thy grandchild as thine own — but never forget that he or she is not thine own. I was confused about this in the beginning. I was at the hospital when Isabelle was born and I thought we were all one big happy family. Not. I had to win over her parents. They loved me — I knew that — but did they trust me? In the early days I felt as if I were auditioning for the part of grandparent. Did I hold Isabelle properly? Didn’t I know that you never put a newborn down on her stomach? It took me a few blunders to secure their trust — which must be renewed every so often, like a driver’s license.

3. Abide by the rules of the new parents. The dos and don’ts of childrearing change with every generation. If I had listened to my mother, I would have held my son only while feeding him (every four hours) — and not one second longer, lest he turn into a “mama’s boy.” These days, with the crush of childrearing information online, most new parents are up to speed — and beyond — but we grandparents most definitely are not. Baby slings? The Mutsy Slider Stroller? Who knows what these things are, or how to operate them?

4. Accept your role. If you’re the mother of the new father, you may not have the same access to your grandchild as the maternal grandmother, at least in the beginning. In most families, new mothers are the primary caretakers of babies and they tend to lean on their mothers for support. This is not a problem — unless you think it is. Your grandchild will love you too. Anyhow, all grandparents — whether on the maternal or paternal side — are at risk of being shut out if they fail to observe any of these commandments. Try to think of yourself as a relief pitcher in a baseball game: You’re on the bench until your adult children call you up — and then you must do as they say if you want to stay in the game. (We’ve already covered this, but I think it’s key.)

5. Don’t be surprised if old issues get triggered when your child has a child. For many people, feelings of competition with their grandchild’s other grandparents provoke traumatic flashbacks to junior high school. This is especially true now, given the proliferation of divorce and stepfamilies. Not only that, some grandparents are able to lavish the kids with expensive gifts, while others live much closer to the children than their counterparts. Still, a little goodwill goes a long way. The heart is a generous muscle capable of loving many people at once, and most of us are able to get past the initial rush of jealousy to find our special place in the new order. (Yes, of course we still secretly hope that our grandchildren will love us more than those other people. We are, after all, human.)

6. Get a life. Sometimes I’ve become overly embroiled in my concern for my son and his family; at other times my desire to be an integral part of their lives has taken precedence over things I needed to do to maintain my own sense of well-being — and I’ve paid the price. Hence, my mantra: “I have my life, they have theirs.” We are close and connected, yet separate. Boundaries, boundaries, boundaries.

7. Let go of all expectations. When Isabelle Eva was born she was living around the corner from us, but when she was two months old her parents moved her overseas. Not only was I heartbroken, my expectations about my involvement in her life were turned upside down. Yet, once I was able to let go of my agenda — which took some doing — I found that I still felt deeply connected to Isabelle and vice-versa. Now my husband and I visit her as often as we can and, in between visits, we Skype and talk on the phone. There are bound to be unpredictable plot twists in every family narrative, but, unless you are raising your grandchildren, your adult children are writing their own story. (See No. 4: Relief pitcher, on the bench.) Who knew that grandparenthood would offer so many new opportunities for personal growth?

Ultimately, the good news about becoming a grandparent, and not being in charge anymore, is that nothing is your fault, either. As Roxana Robinson writes in Eye of My Heart, “It’s like being told you no longer have to eat vegetables, only dessert — and really only the icing.”

Barbara Graham is the editor of the anthology, Eye of My Heart: 27 Writers Reveal the Hidden Pleasures and Perils of Being a Grandmother (Harper), which tells “the whole crazy, complicated truth about being a grandmother in today’s world.“