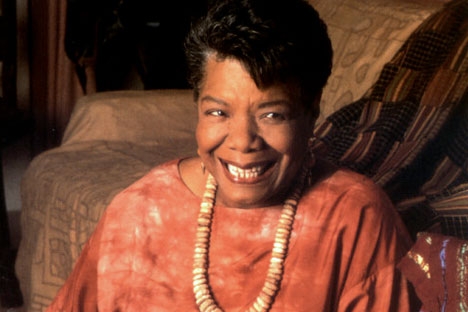 “I loved my grandmother.”

The memories flow out of Maya Angelou’s words like sweet molasses. It’s a tale she’s told before — in her groundbreaking work, I Know Why the Caged Bird Sings (Random House). But now, at 80, Angelou, originally from Stamps, Ark., is a grandmother twice over. Her son, Guy Johnson, is father to Colin Ashanti Murphy-Johnson, 32, and Elliott Jones, 22. She’s also a great grandmother — Colin has two children, Caylin Nicole Johnson, 11, and Brandon Bailey Johnson, 9. Angelou talked to Grandparents.com about her own grandmother’s legacy and how it shaped her thoughts about grandparenting.

“I try to be the same kind of grandparent I had,” said the oft-lauded poet, who splits her time between Winston-Salem, N.C., and Harlem. “My grandmother was the best. She didn’t talk much. She spoke very softly when she did, although she had truly a huge voice; when she sang in church the windows would rattle.”

Angelou herself has been rattling windows with her poetry and prose for five decades, tearing apart emotion, experiences, and ritual, and rebuilding them into an exaltation of strength and love. Her contribution to American literature has been acknowledged numerous times, most recently by Shenandoah University, which awarded the writer an honorary Doctor of Humane Letters in 2008, officially making her Dr. Angelou; she has received more than 30 honorary degrees. In 1993, she became only the second poet in United States history to write and recite an original work at a presidential inauguration, having read, “On the Pulse of  Morning” in honor of President Bill Clinton. (The first was James Dickey, when President Jimmy Carter took office.) Her work has inspired countless artists across generations and genres, and has found new life in the world of underground hip-hop, where it turns up in a song about incarceration by Binary Star called, “I Know Why the Caged Bird Sings.”

Poet, civil-rights activist, entertainer, children’s author, Wake Forest University (North Carolina) professor, American icon, grandmother: Angelou’s life is immeasurable. What is quantifiable is her legendary fried chicken, a fact that is not lost on her grandson Elliott, who makes his way to grandma’s for a good meal when she’s in New York City.

Dr. Maya Angelou: I knew all sorts of things about her that only I knew because we slept in the same bed. I don’t have that closeness with my grandsons nor with the little ones. But they have parents. My mother and father for all intents and purposes abandoned my brother and me when we were 3 and 5.

GP: But in spite of that abandonment, you left Arkansas at 13 and went to live with your mother in San Francisco. You gave birth to Guy shortly after your high school graduation and your mom supported you unconditionally. Did you reflect on that moment when you became a grandmother?

MA: Many times. First I knew the way she was so proud of my son, of her grandson. Just look at my family: in my family you were supposed to be really good-looking if you had a round head. Oh, look at my baby; he has the best round head. He has the Johnson fingers, she would say. I saw the way she treated him and [I saw] his love for her. He loved grandma.

GP: Did becoming a grandparent change how involved you are in your son’s life?

MA: In a way. I don’t get into my son’s business. I’m very careful about that. Those are his sons. He and his wife look at me and see if I am pleased, if I have some reservations, and explain their actions, why this one is grounded or put on a short leash. They are fair people and that is what a grandparent wants her son or daughter to be — fair to their children.

GP: Okay, so you don’t get into their business, but you do get into their stomachs. You even wrote a cookbook, Hallelujah! The Welcome Table: A Lifetime of Memories with Recipes (Random House). Do you have a signature dish you make for the grandkids?

MA: When I come up [to New York] Elliott is always over looking in the pots. If he knows I am coming he leaves a list of things to cook. He has a roommate; now he’s become an aficionado of my cooking. I am a serious cook. They think I really make really great food. I make different curries, chicken curry, they like that. I got them early with the curries with the condiments inside and that is always entertaining as well as enjoyable. My son and grandson say that if I only whisper fried chicken they come out of the walls.

GP: You have a wonderfully gentle humor. Do you ever use humor and your singing and dancing skills from your days in Porgy and Bess to entertain your grandchildren and great-grandchildren?

MA: Yes. I tell them jokes. I mispronounce things, so they say, “Oh, no grandma you don’t do it that way.”

GP: What qualities do your grandchildren possess?

MA: I am happy to say all of them are kind. It’s very important to me that people are kind. If you have any luck at all, you’ll have a job and make some money. You can easily become slobbish and stupid. If they weren’t kind, they could easily think they were entitled.

GP: How did you instill those values in them?

MA: With my grandson Colin, he came down when he was 9, 10, or 11 to Winston, and I would take him to the market and I would find the families who were really jammed up. I would ask what sizes the children were and say to him, I have to get some clothes for a 6-year-old boy, 9-year-old boy, and 12-year-old girl. He would be embarrassed to be buying for a girl. We put all of the bags together and took all of the goods and groceries to the church. It was just a job we had to do. When he was 12, he telephoned me from San Francisco saying, “Grandma there’s a sale on out here. They have kid’s clothes cheaper out here.” [Today] he and his children go to paint a safe house for women and on Christmas Day they serve. That’s the way to do it.

MA: They’ve encouraged me to learn something about the computer. So I’ve learned to play solitaire and [the computer game] Freecell. But, they’ve confirmed for me that kindness wins out in the end. It doesn’t mean indulge anything by being overly kind. I must be kind to myself first.

GP: How is the world different for your great-grandchildren now that we have elected our first black president?

MA: I can’t say for them. I really cannot. For my grandsons, the world is different. I heard [CNN’s] Soledad O’Brien the other day talking about one of her children. She said she told her daughter: This is very important that the we have the first African American president of the United States. She said it so many times; finally, her daughter said, “He really is the first one?”

GP: That’s a beautiful thing. But a not so beautiful thing was when parents of New York City public school students wanted your book of poems, I Shall Not Be Moved (Bantam Books) recalled because you write about incest, which they felt was an inappropriate topic for third graders. How do you address the trials of your personal history with your grandchildren?

MA: I didn’t feel that there was a generational gap, it was a gap in lifestyle. My grandson and great-grandchildren like hip-hop. They are very impressed that a man named Common has come to visit me. Dave Chapelle has come to visit me in North Carolina and spent the day, and that Usher has something about me in some song of his. My big one and little one both feel that I am very important because of that.