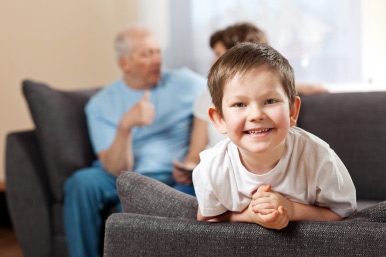 When we asked Grandparents.com members whether they thought parents should pay them for their babysitting services, we received some passionate responses. There’s a huge difference, many of you pointed out, between doing occasional date-night sitting and providing what amounts to no-cost daily daycare. And while many of you agreed that caring for a child on a regular basis warranted a paycheck, others said that they could never accept money from their kids. Check out what your fellow grandparents had to say:

“I have no problem babysitting my grandchildren when their parents have appointments, or would like to go out to dinner. However, when it comes to providing daycare, I feel they should pay something. We got (and still get) a lot of static from my daughter about her paying us for daycare. Considering that she was paying us maybe half the going rate, I think she was really lucky. I think we would do it again, but we would have to have an agreement in writing so we both knew exactly what we were expecting.” — alanapr

“I don’t want to be paid, but … help with the extra housework caused by the children would be nice. When I mention it, I always hear about how much they already have to do.” — ConnieFibro

“I watch my very active 3-year-old grandchild three full days a week, but despite the workout, I love doing it. I don’t get paid, but my daughter-in-law takes me out to dinner often and son and daughter-in-law gave me a generous Christmas gift. They show their thanks in many ways.” — ksgram

“Yes, I charge for watching my grandson and I feel this is only fair. It feel that it teaches responsibility. I like the extra money, so I can spend on him and the other three grandkids without feeling like I spent household money.” — dave4carole

“I watch my twin granddaughters four to five days a week. I don’t and won’t take money from my daughter. It is my pleasure and I wouldn’t miss this opportunity to be close to my granddaughters for any amount of money.” — twingrandbabies

“I am thrilled when asked to babysit, as it gives me time alone with the grandchildren. The pleasure I get out of watching them is worth more than the money.” — LVMom

“It seems strange to be paid for a normal family responsibility. It’s a privilege to be closely bonded with my granddaughter. I assisted in rearing her for five years for 12 hours a day. It would have been much less of a strain had her parents offset my expenses, but my relationship with her has been a salve to my life and given me great pride.” — Grandma2Kayla

“When I babysat for my grandson, it was so both mom and dad could earn money. I told them I would get paid, but half of my check would go into savings for the baby. My daughter was so excited that he was getting savings every time she paid me.” — drec

“Our son and his wife wanted me to quit my job and care for their son and insisted on paying my husband and me. As retired people, we needed the income. This truly has been a joy to see him every day.” — Grannyof14

“If the grandparents watch the child all week every week, the parents should pay something. In my case, though, I beg for opportunities to have my grandchildren. If I ever asked to be paid, I’d never see the kids!” — LindaRS

Where do you stand on paying grandparents? Share your opinion in the Comments area below.