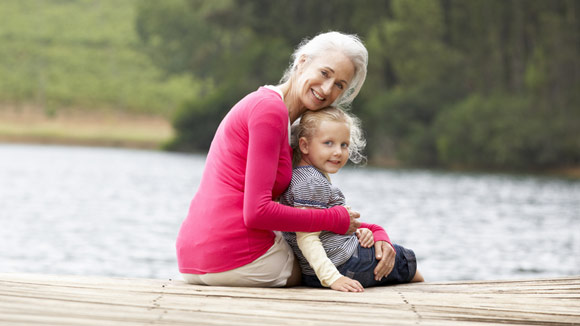 All five of Karen Johnson’s step-grandchildren were born after she married into her husband’s family. Johnson, 53, of Atco, N.J., says she absolutely feels like their grandmother, although she respects the children’s separate relationship with their biological grandmother. For their part, the children feel the same way about Johnson as she does about them. One of her step-granddaughters once told her, “Grammie, a stepmother is someone who comes into the family after you’re already born, but you’ve always been here!”

When a grown child marries someone who already has children, Fendrick says, they all need time to get used to one other, to adapt to different ways of doing things, and to become comfortable with their new situation. Step-grandparents must be patient and not push children to welcome them. If all goes well, and adults work to build bridges between families, the children will come around soon enough. Fendrick’s oldest step-grandchild was 7 when Fendrick’s daughter married the girl’s father, and the girl, understandably, “had the most loyalty issues.” When any child’s parents divorce, the trust level of their children founders, Fendrick says. “She kept her guard a little bit,” Fendrick says of her oldest step-grandchild. “She relates to her mother more than the younger ones do.”

It can be awkward entering children’s lives as a step-grandparent at different stages of their development, Fendrick notes, especially if you haven’t been a grandparent before. It’s important to work to recognize each child as an individual, and to relate to the child appropriately. “Building a relationship with step-grandchildren is not harder work, but it requires greater awareness.” Fendrick says of her own step-grandchildren, “I try to respect them for who they are, respect that they were formed before I came on the scene, respect their stages of development. A teenager is something very different from a 3-year-old.”

And if all goes well, your relationship with your step-grandchildren will blossom, and that “step” will fade as you become just “Grandpa” or “Nonna,” or in Fendrick’s case, “Kimmie.”

Zenker has built such a relationship with her 2-year-old step-grandson, Benny. “He loves books. He is charming and smart,” Zenker says. “It’s joyous to watch him develop and think.”