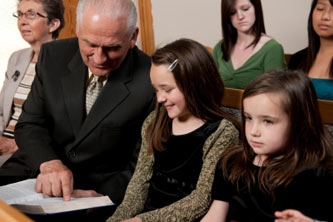 What do you do on Sunday morning when your grandkids are with you, and you’d normally go to church but the children’s parents (that is, your kids) usually don’t?

This question arose recently when my husband, Jess, and I were caring for our granddaughter, Lucy.

We had driven the hour-and-a-half to Burlington, Vermont, for Lucy’s third birthday. As her parents got their house ready for Lucy’s party, I took her out with me for the morning. It was Palm Sunday, a special day for Christians like me. When Lucy’s mother, Elizabeth, was little, we would have gone to church that day, without question. But now we were the grandparents, not the parents, and we knew that Lucy’s father, John, was not religious at all. Elizabeth doesn’t go to church now, either, although she doesn’t share her husband’s strong opinions about organized religion. When they visit us, Elizabeth and Lucy often come to church with us, and Lucy enjoys it.

So there we were, with our granddaughter on Palm Sunday. We wanted to go to church, but we were uncertain. What was the right thing to do?

I am a psychotherapist, and a former pastor at Congregational churches. In my work, I’ve encountered other grandparents struggling with the question of how to handle religious observance when their beliefs and routines are not in sync with those of their grandchildren’s parents.

We believe in the benefits of a supportive church or synagogue community; the value of tradition and the power of ceremony; and the strengths one can draw from a belief in a higher power. We’d love to share those things with our grandkids. But we also don’t want to alienate or disrespect our children or sons- or daughters-in-law. No one wants to be the stereotypical overbearing mother-in-law.

When we arrived at Lucy’s house that morning, John was out, so we talked to Elizabeth about our church plans, and she left the decision to us. If we went, she said, she’d tell John that she saw a trip to church as a special experience their daughter could share with her grandparents. Feeling good about her response, we decided to go.

And at the service, Lucy did seem to find the experience “special” – she joined in singing a hymn with the 200 other people in the lofty sanctuary, and sat earnestly in silence when appropriate.

Our son-in-law’s lack of interest in religion is far from unique among today’s young parents. Studies have found that young adults are dropping away at increasing rates from mainline churches and other houses of worship. One interesting study from livescience.com found an inverse relationship between life expectancy and church attendance – those who expected to live longer attended church less often than others. The further you feel you are from death, in other words, the less interest you have in religion. On the other hand, at many conservative or evangelical churches, or Orthodox synagogues, the young-adult population is on the rise, causing some grandparents who are less active churchgoers to worry that grandchildren will take up a more rigid and judgmental form of worship than they are comfortable with.

In our society, people move more often and change religious affiliation more than ever before. Religious differences between generations is inevitable. But family conflict doesn’t have to be. I’d recommend following these tips to avoid holy war in your own extended family: