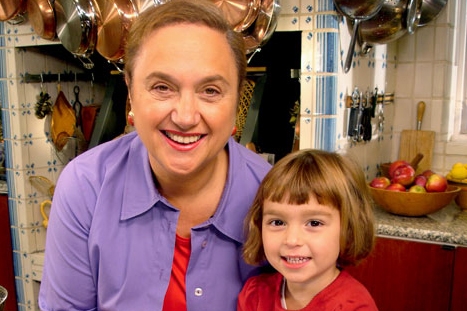 From the beginning, says chef Lidia Bastianich, she cooked to keep her grandmother with her. Bastianich had spent her early years with her large, extended family in Trieste, Italy, but with World War II and its aftermath in that region, her parents soon managed to move their children to New York City. Her grandmother, however, preferred to remain in Italy. “I was 12 when we arrived and I missed her very badly,” says Bastianich, the chef and television star. “Basil reminded me of her, so did red sauce, rosemary, garlic toasting in olive oil on the stove. I couldn’t get enough of it.”

“I started the children at 2 months old, rubbing herbs on my fingers and brushing them under their noses, keeping them in the kitchen, giving them little things to do,” she says.Soon, she was concentrating on smells and tastes, learning about the nature of ingredients, learning to cook them with her mother, reading about food, talking about food, all the learning that would eventually yield eight restaurants, five cookbooks, and a show on public television. Bastianich, however, defines herself less by her professional accomplishments than she does her five grandchildren. She doesn’t want these children to lose what she lost: regular visits to their grandmother’s kitchen. At least once a week, therefore, as she and her progeny peel, chop, and cook, there is an intimacy, a deep familial feel in the kitchen that extents to her table where her children and grandchildren and her 86-year-old mother gather for a meal.

The bond that develops around shared tasks and accomplishments around the home is a deep one, says Bastianich. And, she believes, grandparents were invented to teach the realities of everyday life. “The parents are looking ahead, to the next soccer game, the homework, all the plans that have to be made today for tomorrow,” she says.

“Later in life, when you are a grandparent, you are less claimed by worrying about the next thing and more able to look back. I have the patience to teach the grandchildren; I have the time.

“Language is lost in one generation,” she says. Noting that the children of immigrants often speak only the language of their adopted country, she says: “The mother tongue gets lost, but food continues.” At the table, “defenses melt, you have to take in, you are vulnerable, open. And when a grandparent provides this table over and over and over, the grandchild learns family history, cultural history, and grows up with a sense of belonging.”

Belonging is the certainty that is shaken when a family immigrates to another land. Especially, says Bastianich, “if your grandmother stays behind.”

Experience more of Bastianich’s passion for Italian cooking at lidiasitaly.com.

For more of her cooking wisdom, see Tips From a Grandmother – and Chef – for All Seasons.