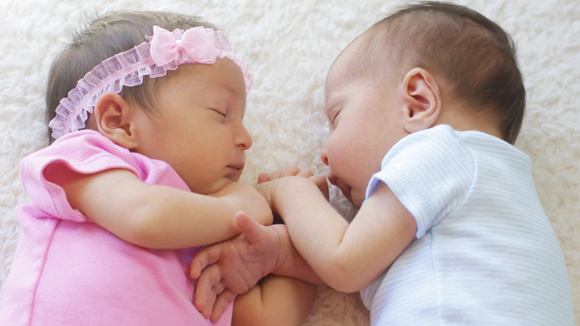 The number of twins being born in the United States is on the rise. According to the National Center for Health Statistics, mothers gave birth to multiple babies 139,816 times in the U.S. in 2005. About three percent of all births in the nation are births of twins (or more). Quadruplets, quintuplets, and sextuplets may get more attention, but 95 percent of multiple births involve twins. The rate has risen in recent decades in part because of the wider use of assisted-fertility treatments, which tend to increase a woman’s chances of delivering multiple babies. Some scientists, however, theorize that synthetic growth hormones in cows’ milk have also contributed to the rise.

The arrival of twins can be stressful for parents and grandparents, especially in families with no experience in raising and caring for two infants at the same time. Tim Wilson, 61, of York, Pa., is a grandfather of six, including identical 5-year-old twin granddaughters Hailey and Zoe. When he found out his daughter was going to have twins, he says, “I was excited but not without some stress. Now this was my little girl having not one but two babies.” To make matters more complicated, Wilson’s twin granddaughters turned out to be identical.

It’s a standard sitcom gag — identical twin boys or girls pretend to be each other, trick their parents and friends, and get into all kinds of mischief. While it’s a funny concept, in real life becoming the grandparent of identical twins can be trying, although fewer than one set of twins in 200 is identical and identical triplets are even rarer. If, like the Wilsons, you’re about to welcome identical twins into your family, don’t worry. Deborah Wilson, 61, confessed that she fretted about mixing up the twins throughout her daughter’s pregnancy. But once Hailey and Zoe arrived, she says, “I could see a difference in their eyes right from that first moment.” It also helps that, although identical twins look alike, they often vary in size even as infants.

“I had to work at it,” Tim Wilson says, recalling the struggles to tell his granddaughters apart when they were infants. He still occasionally calls one by the wrong name, but feels that’s less a “twin thing” than a “harried adult” thing. After all, he says, “My Dad called me by my brother’s name most of the time and he is ten years older than me!”

Most twins, identical or not, develop their own distinct personalities, as any siblings would. Young twins, however, often prefer to be together as much as possible, which can make finding time alone with them as individuals a challenge for grandparents. Deborah Wilson describes Hailey and Zoe as a twosome that likes to play together constantly. As the girls have gotten older, she has tried to carve out more time for one-on-one conversations with each of them to try to become closer to them as individuals.

For years, Elizabeth Eisenhart, 68, a grandmother of eight in York, Pa., experimented with giving each of her 8-year-old twin grandsons, Ethan and Evan, time alone with her. It didn’t always succeed. “It seemed hard for them, almost like a part of them was missing,” she says. Eisenhart now makes plans with the boys as a pair.

Many grandparents of twins have had similar experiences, with individual twin grandchildren feeling “apart but together.” If one of Tim Wilson’s twin granddaughters is playing a game with Grandma and the other is playing a different game with Grandpa, he says, “each is always looking out of the corner of her eye to see if what the other is doing looks like more fun.”

There are small but important things grandparents of twins do to respect their grandchildren’s individuality. The Wilsons, for example, always use their granddaughters’ names instead of calling them “the girls” or “the twins.” They also respect the girls’ very different, but equally welcome approaches to grandparent affection. “Zoe will say, ‘Grandpa, I love you,’ out of the blue,” Time Wilson says, “and Hailey will just sit on my lap out the blue just to snuggle a little.”