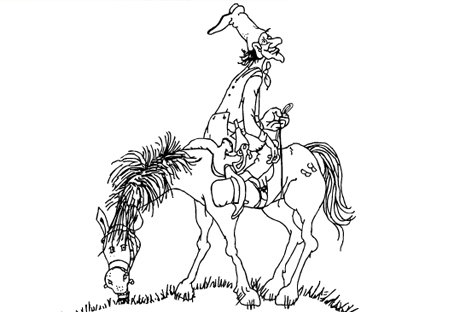 Poet Miller Williams remarked that poetry shouldn’t be exotic or rare, but should be “part of our lives from the time we shake our cribs in rhythm … ” The classic and contemporary poems below will allow you to make that journey along with your grandchildren.

Poems for toddlers and preschoolers:

Stevenson gently evokes the injustice of having to go to bed when it’s still light outside in this poem from his 1885 classic, A Child’s Garden of Verses.

In winter I get up at night
And dress by yellow candle-light.

Read Bed in Summer in its entirety here.

Shel Silverstein’s playful rhymes have delighted children and adults since the 1960s, and now an interactive website allows computer-savvy kids to bring a sampling of his illustrated poems to life on screen — like this poem, published in 1981 in his collection A Light in the Attic.

Read and hear Backward Bill in its entirety here.

3) A PIZZA THE SIZE OF THE SUN by Jack Prelutsky

The nation’s first Children’s Poet Laureate is beloved by little ones for his outrageous and zany creations. Enjoy his books and “play” on his site with this poem published in 1996 by HarperCollins in a book of the same title.

I’m making a pizza the size of the sun,
a pizza that’s sure to weigh more than a ton

Read A Pizza the Size of the Sun in its entirety here.

There’s a reason why nursery rhymes are our first encounter with poetry — they’re fun to recite and easy to remember. Revisit old favorites, like this one in the Poetry Foundation’s children’s poetry archive.

5) MINE by Lilian Moore

This 1967 short verse about personal ownership — starting with many toddlers’ favorite word — makes an ideal beach read. You’ll find it in the Poetry Foundation archive.

I made a sand castle.
In rolled the sea.

Read Mine in its entirety here.

6) CASEY AT THE BAT by Ernest Lawrence Thayer

Take your grandchildren back to the golden age of baseball with the1888 narrative poem about the overconfident Mighty Casey, and the Mudville fans he did wrong.

The outlook wasn’t brilliant for the Mudville nine that day:
The score stood four to two, with but one inning more to play,

Read Casey at the Bat in its entirety here.

7) A VISIT FROM ST. NICHOLAS or THE NIGHT BEFORE CHRISTMAS by Clement Clarke Moore

The author, a scholar at New York City’s Columbia University, is said to have written this poem to entertain his children. Whether his inspiration came from the Knickerbocker’s History of New York or a Christmas Eve sleigh ride is disputed. But this1822 poem has become a traditional holiday favorite throughout the nation.

‘Twas the night before Christmas, when all through the house
Not a creature was stirring, not even a mouse.

Read A Visit from St. Nicholas in its entirety here.

8) THE BLUES by Langston Hughes

Best-known as an artist of the Harlem Renaissance (1920 to the late 1930s), Hughes wrote several poems that evoke jazz and blues. As such, the poems are ideal for exploring an important cultural movement and the connection between poetry and music. Add simple instruments to this poem published in 1926 and it becomes a musical game.

When the shoe strings break
On both your shoes

Read The Blues in its entirety here.

Young people love this poem for the exciting narrative and for Carroll’s wonderful made-up words. It was published in 1872 in Through the Looking-Glass and What Alice Found There. Read this one with all the drama you can muster. And remind your grandchildren who Alice was.

‘Twas brillig, and the slithy toves
Did gyre and gimble in the wabe;

Read Jabberwocky in its entirety here.

10) THE TYGER by William Blake

With this Blake poem, published in 1794 in Songs of Experience, the late poet and teacher Kenneth Koch (1925-2002) would recommend that you ask childeren to imagine themselves talking to some beautiful, mysterious creature. What animal would it be? What questions would they ask?

Tyger, Tyger, burning bright
In the forests of the night,

Read The Tyger in its entirety here.

11) THE RAVEN by Edgar Allan Poe

If you haven’t reread this poem in a while, you’ll be surprised at how deliciously creepy it remains — pull it out for a perfect scary-story night. It was published in 1845 in The Raven and Other Poems.

Once upon a midnight dreary, while I pondered, weak and weary,
Over many a quaint and curious volume of forgotten lore

Read The Raven in its entirety here.

Whitman wrote this poem in 1865 in response to Abraham Lincoln’s death. The steady beat, stirring refrain, and traditional metaphors of the poem capture the imaginations of young people.

O Captain! my Captain! our fearful trip is done;
The ship has weather’d every rack, the prize we sought is won

Read O Captain! My Captain! in its entirety here.

A devoted animal lover, Marianne Moore wrote poems focusing on everything from the scaly anteater to the ostrich of this poem, published in 1961 in The Complete Poems of Marianne Moore.

Although the aepyornis
or roc that lived in Madagascar, and

Read He “Digesteth Harde Yron” in its entirety here.

At this Washington State University site, unlock the hallucinatory images of Coleridge’s classic poem about Kubla Khan and Xanadu. The site also includes an explication of the poem, originally published in Sibylline Leaves in 1817.

In Xanadu did Kubla Khan
A stately pleasure dome decree:

15) THIS IS JUST TO SAY by William Carlos Williams

Young readers relate both to the straightforward language of this poem, published in 1962 by New Directions Press, and to the idea of apologizing for something you’re not really sorry about.

I have eaten
the plums

Read This is Just to Say in its entirety here.

16) “HOPE” IS THE THING WITH FEATHERS by Emily Dickinson

Dickinson’s willingness to consider life’s big issues in this 1861 poem strikes a chord with adolescents, who are starting to consider abstract concepts like death, love, or, here, hope.

“Hope” is the thing with feathers—
That perches in the soul—

Read “Hope” is the Thing with Feathers here.

17) WE REAL COOL by Gwendolyn Brooks

We real cool. We
Left school. We

Read We Real Cool in its entirety here.

The meter and rhyme of this Edna St. Vincent Millay poem gives it a nursery-rhyme feel, but the poem offers a romantic glimpse of adult freedoms to come.

We were very tired, we were very merry—
We had gone back and forth all night on the ferry.

Read Recuerdo in its entirety here.

19) ONE ART by Elizabeth Bishop

Published in The Complete Poems 1927-1979, this piece tells us that though their losses might seem minor to us, adolescents experience them keenly.

The art of losing isn’t hard to master;
so many things seem filled with the intent

Read One Art in its entirety here.

Collins, poet laureate from 2001 to 2003, had this poem published in an anthology of his work, Sailing Around the Room, 2001. Collins uses language to convey the toasty warmth and coziness of a snow day and the radio’s metronomic mention of kids’ school-closings to contrast with the cruel chill of schoolyard gossip.

Today we woke up to a revolution of snow,
its white flag waving over everything

21) HOW I LEARNED TO SWEEP by Julia Alvarez

Spending part of her childhood in the Dominican Republic, Julia Alvarez now makes her home in New York City. She writes vividly about her struggles with her mother and her own early reactions to war in this 1985 poem of domesticity.

Read How I Learned to Sweep in its entirety here.
For our complete guide to what your grandchildren are learning in school, click here.