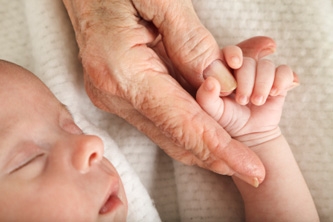 Sometimes, one grandparent can change the world.

Across the country, many retirees are discovering the power of their TLC — and for some, their true calling — by volunteering to hold babies in hospital Neonatal Intensive Care Units (NICUs).

The cuddler program at the University of California at San Diego (UCSD) Medical Center, for example, uses about 50 such volunteers. Their cuddlers range from college students to grandparents, but almost half are retirees. Some are long-distance grandparents; others have no grandkids at all.

For many cuddlers, the job is just that — cuddling babies in need. NICU nurses provide these at-risk newborns with their medical needs but taking the time to sing to babies, or to calm them down by rocking or just holding them is not always possible for these busy professionals. That’s where the cuddlers come in. At UCSD, in addition to rocking and bottle-feeding, volunteers change diapers, clothes, and linens when necessary.

At Children’s Hospital at OU Medical Center in Oklahoma City, doctors sometimes ask cuddlers to hold babies during medical procedures, to help keep them calm during what very may well be a distressing situation, says Glenna Hoke, the center’s director of volunteers.

Parents whose babies are in the NICU often cannot stay at the hospital full time. They may be dealing with the mother’s health, or have other young children at home who need their attention as well. Sometimes they just need a break from the constant vigil that is life in the NICU. They appreciate knowing their child is being cared for while they can’t be there and are grateful for other types of support as well. Milly Arroyo, 69, a retired nurse and teacher who has volunteered at the North Carolina Children’s Hospital for more than eight years, recalls one parent who had a baby in the NICU and a toddler in the hospital at the same time. Arroyo stayed with the toddler for a while so the mom could spend some time with the baby.

Cuddler programs are often the most popular volunteer opportunities in hospitals, and so applicants are often assigned to other areas first and work their way up to NICU duties. Many facilities, such as UCSD, consider cuddlers to be patient-care providers, and require the volunteers to go through several hours of training, both in the proper way to hold and handle delicate babies, and in the protocols of the hospital’s staff in general. Volunteers also undergo medical screening to check for communicable diseases, and in some cases, background checks. They’re asked to work one three-to-four-hour slot per week, but many stay on once their shift has ended.

Roger Whistler, 72, a grandfather of 12 and a great-grandfather of nine, cuddles babies from 8 am to noon every Monday morning at UCSD. He’s been doing it for 17 years. He learned about the opportunity through a public-service announcement on TV. “I said, ‘I can do that,’ and I did, and I do.” He and other volunteers work not only with preemies, but also with babies who have drug dependency issues or have undergone surgery.

While volunteers often work with babies as small as two-and-a-half or three pounds, who may be hooked up to machines, the care of the most “medically fragile” babies is left to the professional nursing crew, says Lynne Trumbore, R.N., who coordinates the program at UCSD.

Giving parents and nurses a needed break is great, Trumbore says, but “babies are the biggest benefactors. The extra TLC helps them get stronger and be less stressed and helps them go home sooner.”

Whistler agrees. “We give them the human touch and comfort they need to develop.”

Nancy Elkins, 72, a grandmother of five who volunteers at North Carolina Children’s Hospital, says, “Holding newborns was one of my goals of retirement. I retired from the New York City public-school system, where I worked as a counselor with special-education students in the South Bronx. Many of them had never known the experience of having a caring adult in their lives, and their insecurity and poor behavior made me wish that I had been able to hold them at birth. I often say that holding newborns is my nonviolence project.”

“I look forward to my Monday mornings all week,” Whistler says. “It’s my baby fix.”

Are you interested in learning more about becoming a volunteer cuddler? If you’ve got between three and four hours a week to spare and would like to share some of your love with a baby in need, contact your local hospital’s volunteer services department for more information.