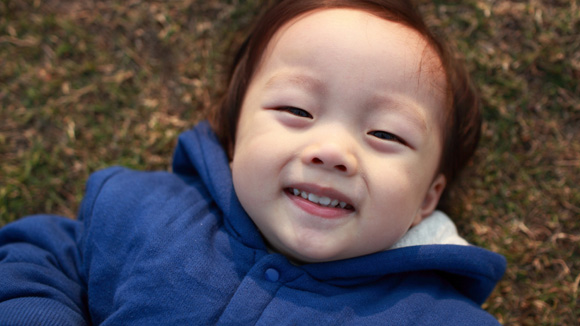 It’s a magical moment: You gently cradle your newborn grandchild in your arms. You love the child immediately — but how long will it take for the baby to know and love you back? We asked the experts how quickly infants are able to recognize and bond with the important people in their lives — especially, their grandparents!

Out of sight, out of mind

Babies can see right away, but that doesn’t mean they can tell one face from another, says Glen Steele, chief of the pediatrics and vision-therapy program at the Southern College of Optometry in Memphis. “At first,” Steele says, “his whole world is a buzz of stimuli and constantly changing light.” But soon, the baby develops the ability to focus on the person holding him or her. “The most effective visual stimulation for a baby is simply consistent eye contact from the person holding him, feeding him, and changing his diaper,” Steele says. Hold the baby at a comfortable distance, he advises, “so that your face becomes the primary object he sees.” By about three months, babies can make out people and objects at a slightly greater distance of about 12 inches, and will start following moving objects with their eyes and reaching for toys, books, or Grandma’s shiny earrings. Finally, at four or five months, your grandchild should be able to recognize your face in a crowd of other relatives.

The magic of touch

From birth, babies use all five senses to try to make sense of the people and things around them, says Joanne Baum, Ph.D., author of Got the Baby — Where’s the Manual?! “Touch is especially important for newborns,” she says. “Babies cry easily if someone is nervous and uncomfortable holding them, but if a grandparent’s arms are relaxed, the baby feels safe.” Infants quickly learn to recognize voices and vocal nuances, as well — so keep up a stream of chatter (nonsense or baby talk is fine) around a newborn. “Speaking in a soothing, comforting way will help establish a connection between you and your grandchild,” Baum says.

Sometimes that connection comes in ways you never expect. Debbie Glovier, 51, of Beaver Falls, Penn., remembers a recent night with her newborn grandson, Nicholas. “My daughter and son-in-law were exhausted from being up with the baby, so I took him for a while,” she says. When Nicholas became fussy and started crying, Glovier slid her pinkie finger into his mouth and sure enough, he calmed down. “He sucked himself to sleep, and we just sat there together so peacefully,” she says. “The funny thing is that now, at two months old, he will still take my pinkie — but no one else’s!”

Put on a happy face

How quickly you’ll be able to bond with your new grandchild depends on how often you get to see the baby: If you’re on the scene daily, expect to hear happy coos within weeks. If you see the child only every few months, the process will take longer. But regardless of how often you visit, you’ll know that you’ve made a new friend when your grandchild gives you that first toothless grin. You know the one — spreading from ear to ear and accompanied by a full-body wiggle, it can in no way be mistaken for a gas bubble. For Glovier, the big moment happened when Nicholas was about six weeks old. “He was sleeping in his car seat,” she says. “When he woke up, I said, ‘Hello, little guy,’ and he broke into the biggest smile ever!”

The timing of the first smile varies from child to child, but generally you can expect a grin sometime between one and three months, according to the American Academy of Pediatrics. And be prepared to be blown away. “You forget how exciting it is,” Glovier says. “You went through it with your own kids, but it’s somehow different with a grandchild. It absolutely melts your heart when you realize he knows you.”