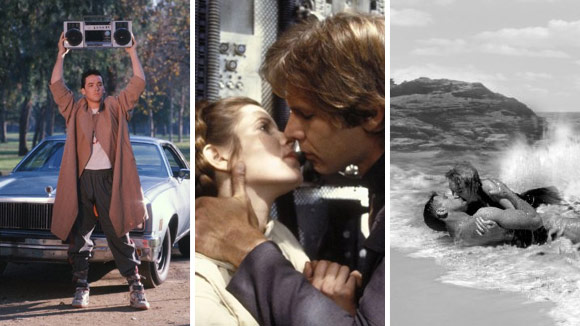 Plot: Over the Christmas holiday, everyone in England falls in love with everyone else in England.

Sigh!: Newlyweds Juliet (Keira Knightly) and Peter (Chiwetel Ejiofor) are enjoying a cosy night at home when the doorbell rings. Juliet jumps up to answer; it’s Peter’s best friend, Mark (Andrew Lincoln), who silently reveals his affection for her through a series of cue cards. For a second, let’s ignore that this actually puts all three of them in a terrible position; it’s the sweetest depiction of unrequited love we know of.

Plot: The 1953 Academy Award winner for Best Picture (and seven other Oscars) features Montgomery Clift, Frank Sinatra, and Burt Lancaster as soldiers stationed in Hawaii just before World War II. Based on the steamy novel by James Jones, it’s a walloping drama packed with violence, intrigue, and of course, romance.

Plot: After the death of his beloved wife, Ellie, closed-off Carl (Ed Asner) uses thousands of balloons to fly their house to South America, fulfilling her lifelong dream. When it’s discovered that young Wilderness Explorer Russell has stowed away on the trip, Carl must return him home safely.

Sigh!: The movie’s opening 10 minutes shows Carl and Ellie’s first encounter as children, followed by a montage of their decades-long love affair. Rarely has marriage been depicted as accurately and affectionately on film, never mind a cartoon. We dare you not to cry.

Sigh!: Days after breaking up with Lloyd, Diane tosses and turns in her bed, trying to sleep. Before long, he shows up with a boombox outside her window, playing Peter Gabriel’s “In Your Eyes” at top volume – the very song they made love to for the first time. It’s the best moment in an honest, funny, heartbreaking movie full of them.

Watch the clip here (but really, you have to see the whole movie).

It’s impossible to choose between Meg Ryan romantic comedies, because they are all so charming and iconic.

Sleepless in Seattle (1993): After a series of near misses, Annie Reed (Ryan) throws over her safe but boring fiancÃ© to meet Seattle widower Sam Baldwin (Hanks) atop the Empire State Building—. His son approves.

When Harry Met Sally (1989): First, Sally Albright (Ryan) and Harry Burns (Billy Crystal) hate each other, then years later they become best buddies, then they sleep together, which, of course, goes horribly wrong and begs the question: “Can men and women really be friends?”

Sigh!: After careful deliberation, we had to go with the New Year’s Eve scene in When Harry Met Sally, when Harry professes his love for Sally. She’s still mad at him until he explains all the tiny reasons why he’s in love with her, finishing with, “When you realize you want to spend the rest of your life with somebody, you want the rest of your life to start as soon as possible!”

Plot: The winner of five Academy Awards, Dr. Zhivago portrays World War I and the Russian Revolution through the eyes of Yuri Zhivago (Omar Sharif), a doctor with the soul of a poet. In the midst of political intrigue and wartime strife, Yuri embarks on a passionate on-again-off-again love affair with Lara (Julie Christie), a mysterious and beautiful woman connected to soldiers and activists—but their love is not to be.

Sigh!: After losing contact with Lara time and again, Yuri thinks he sees her from a streetcar in Moscow. He bangs on the window to try to get her attention, struggles to get off the crowded car, and (huge spoiler alert!) collapses and dies on the street before he can reach her.

Plot: Katie (Barbra Streisand), an outspoken, Jewish political activist, and Hubbell (Robert Redford), a dashing, carefree WASP, meet in college and eventually marry, despite their wildly different backgrounds and personalities. A rocky relationship ensues, and divorce follows, as they realize that no relationship can exist on a pedestal.

Sigh!: In the final scene, they meet again after they’ve both remarried. He declines her invitation for a drink, and they both finally see the truth: that Katie is the only person who has ever truly believed in him, but the memory of the way they were is all they will share.

Plot: Based on James Fenimore Cooper’s classic novel, this film takes place in 1757 in the wilds of western New York, amidst the violence of the French and Indian War. Sporting a lush mane of dark hair, Daniel Day-Lewis plays Nathaniel Hawkeye, a white man adopted by a Mohawk tribe, who winds up in a race to save his love, Cora Munro (Madeline Stowe), from a war-hungry American Indian.

Sigh!: Realizing they can’t outrun their pursuers, Hawkeye and Cora are forced to part ways as they hide in a cave underneath a giant waterfall. He gives Cora one job: stay alive no matter what occurs, and he will find her. Then Hawkeye leaps into the waterfall, plunging into the roiling depths below.

Plot: Yuppie couple Sam Malone and Molly Jensen (Patrick Swayze and Demi Moore), couldn’t be happier in love. But shortly after moving in together, Sam is killed by a mugger, leaving Molly devastated. With the help of swindler medium, Oda Mae Brown (Whoopie Goldberg), Molly learns that Sam’s ghost has stuck around to protect her— and that his death was no accident.

Sigh!: Although it’s been much parodied, Molly and Sam at the pottery wheel truly is a wonderful love scene. As the song “Unchained Melody” by The Righteous Brothers plays in the background, Sam “helps” Molly at the wheel until their clay-covered caresses push pottery from their minds completely.

Watch the clip here. (Note: the scene gets pretty steamy around min. 2:20!)

Plot: At the start of World War II, nightclub owner Rick Blaine (Humphrey Bogart) must decide whether to help his ex-lover, Ilsa Lund (Ingrid Bergman), and her husband, resistance leader Rick Laszlo (Paul Henreid), escape from arrest in Morocco to the neutral U.S.

Sigh!: Do we really need to describe this scene? Odds are you know the thing by heart already:

RICK: If that plane leaves the ground, and you’’re not with him, you’’ll regret it – maybe not today, maybe not tomorrow, but soon, and for the rest of your life.

ISLA: But what about us?

Compiling this list was an act of tough love. Ultimately, we couldn’t include everything, but here are a few more of our favorite scenes: