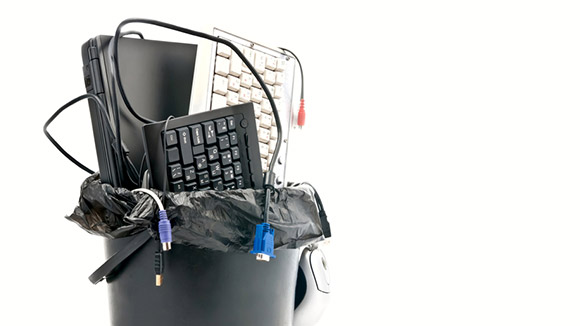 Grabbing the latest technology is always exciting. Remember bringing home your first VCR, booting up your first computer, and making your first cellphone call? But as technology continues to improve by leaps and bounds, a trail of obsolete junk seems to follow closely behind — like that old VCR, computer and cellphone!

According to The New York Times, 150 million mobile phones were disposed of in 2010. And The Guardian cites an MIT study which found that when you include computers, monitors and TVs, that number jumps to over 258 million pieces of junked tech per year.

So can you just toss a computer in the garbage? And is your identity safe if you give away an old smartphone?

5 Things to Consider Before Disposing of Your Tech…

1) Is throwing out computers and phones even an option?

According to the Environmental Protection Agency, “Some electronics (such as color CRT [short for ‘cathode ray tubes monitors,’ the precursor to more modern ‘LCD’] computer monitors and TVs, and smaller items such as cell phones and other hand-helds) test hazardous under Federal law.” And a 2012 independent study found that of 36 tested cellphones (including the iPhone 5 and Samsung Galaxy S III), 100% contained toxic chemicals such as lead or mercury that can cause environmental and health issues if not disposed of properly.

Though Federal exemptions allow households to throw away such items, it may be against your state laws. (The National Center for Electronics Recycling can help you find laws passed in your state.) Regardless of where you live, the EPA highly encourages reuse and recycling as opposed to simply tossing out tech stuff in the trash. (See tip #3 for more details on tech recycling.)

2) Is it still worth anything?

You spent what seemed like a fortune on the most up-to-date gadget money could buy just a couple years ago. How can it be worth nothing today? Well, even though tech depreciates quickly, selling or trading in old devices may still yield you some cash. A popular phone in good condition, like the iPhone 4S, is still reselling for over $100 nearly three years after its release, according to reseller Glyde. And Best Buy estimates the trade-in value for even a four-year-old iPad 1 at $65.

If you’re looking to sell, the easiest option is to use sites that specifically deal in reselling gadgets such as Gazelle and Glyde.

Trading in old electronics is much simpler. For instance, Apple has a Reuse and Recycle program offering credit for old iPads, laptops, etc. And most major wireless companies will gladly give you some kind of buy-back price for old smartphones. Amazon will let you trade in all sorts of stuff for gift cards. And not to be outdone, stores like Best Buy, RadioShack and even Target all offer trade-in programs, as well.

The simplest solution of all? Try an “ecoATM.” The company has nearly 900 locations where you can deposit old devices and immediately get cash in return, just like a normal ATM.

3) Not worth much? Donating or recycling is your best bet.

Plenty of charities can find ways to put your old devices to good use including Cell Phones for Soldiers and the National Coalition Against Domestic Violence. It’s a tax write-off and the charities will even cover your shipping costs.

At the very least, make sure your device gets recycled instead of ending up in a landfill. Earth911.com is an especially good resource allowing you to search by zip code to find out where you can recycle any item.

So you’ve decided where your device is going; now you have to prepare for its departure from your life.

The first step: Make sure any data you might need in the future is “backed up” – meaning that you are able to find any information you stored on that device somewhere else after the device is gone.

Whatever you do, make sure you back up everything. You can always delete files later, but once they are gone, they are gone for good.

5) Protect yourself by covering your tracks!

Simply deleting files off a hard drive doesn’t guarantee that whatever you’re disposing of is entirely clean. “Most of the time, people think that just erasing all of the files off of their computers will be sufficient,” warns Courtney Merz of CDR Global, an electronics recycler, “but files still remain on your hard drive when you do that.” The only guaranteed way to prevent your personal data from falling into the wrong hands is to wipe your hard drive clean or even have your data removed or your drive physically destroyed by a professional. [NOTE: The “drive” should be physically destroyed by a professional—if you try to physically destroy a drive by yourself by say, smashingit on the ground, you might not do it well enough to truly “destroy” the device. Nothing from a hard drive is ever “physically removed.”]

For cellphones and other small electronics, you’ll want to restore the device to its factory settings, which is generally pretty easy and removes most of your personal data. Also remove components that aren’t necessary such as microSD cards that store additional files or SIM cards that identify your phone. These small cards can typically be found in slots after removing the back of your phone. Cameras, mp3 players, and other devices can contain storage cards as well. Make sure you remove or wipe these of any file.

One more thing: Nowadays, even scanners, copiers, and printers can have internal hard drives storing files from the device’s history, so don’t forget about them. If you’re uncomfortable or unsure about how to safely protect yourself from allowing others access to your old files, consult a professional.