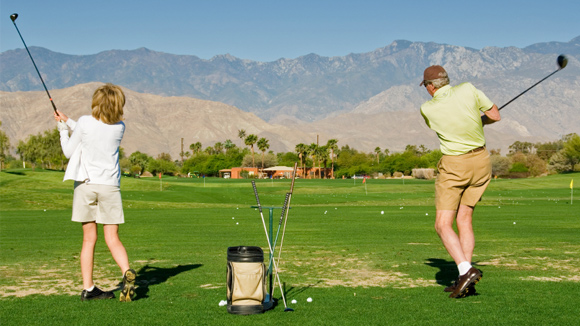 The Costanzas had Del Boca Vista. “The Golden Girls” had Miami. And now “The Best Exotic Marigold Hotel” has India. You don’t have to join the masses on Florida’s eastern coast or travel around the world to find a happy place to retire.

We’ve rounded up a few off-the-radar cities that you may not have thought of, where retirees are happier than flamingoes and less than a day’s travel to major U.S. cities.

Personality: Sun-Chasers Who Love Authentic Mexican Food and the Mountains

“I feel a kinship to the mountains,” says Gordon Packard, 74, a 65-year Tucsonian. “I wasn’t aware of how important [they were] until I spent a year away from Tucson in the East. There was nothing to see there.”

Tucson’s nearly 300 days of sunshine a year make it a weatherman’s dream job, and the clear skies are hard to beat. “The visibility is extraordinary,” says Packard.

But more than just purple mountains’ majesty, Tucson has become a cultural center for film and performing arts. “It’s not just the Wild West and Stetson hats,” says Packard.

Tucson boasts a robust performing arts scene that includes a ballet company, professional theater, symphony and opera company. Home to 215 art organizations and more than 35 art galleries, the city is literally bursting at the seams with thousands of pieces of art by the masters as well as up-and-comers.

With The University of Arizona as an academic anchor, residents also can “fill up their weekly calendar with all kinds of events,” says Packard, or watch Wildcats take on the Sun Devils in “The Duel in the Desert,” one of the country’s oldest and most heated football rivalries.

If you’re a history buff, you need only venture just outside the city limits to visit old mining towns, missions, and archaeological sites. And with the Mexican border a mere 66 miles away, you’re never far from authentic Mexican culture and food.

For more on Tucson, go to VisitTucson.org.

Happy vibes. That’s ” The City of Roses” in a nutshell. “It’s just a generally welcoming atmosphere,” says Jo Senter, 70, a Seattle transplant and three-year Portlandian. “Whether you want to be quirky or conservative you can do and be anything you want. It’s an acceptance of being that I haven’t found in other cities.”

Senter, who’s also lived in New York, especially appreciates Portland’s laid back attitude. “In Portland, nobody looks at hair. Casual is a way of life,” she says. There’s no such thing as a dress code.

More than just its free-spirited, progressive atmosphere, Portland’s infrastructure includes an outstanding transit system. Metro, streetcar, bus, you name it they’ve got it. “There are very fun neighborhoods that wouldn’t be convenient without public transportation,” says Senter.

If you’re more active, Portland ranked 12th most walkable large city in the United States, according to Walk Score. “All the amenities – grocery, community center, drugstore – are within walking distance and that includes some of the older neighborhoods,” says Senter.

Prefer two wheels to two feet? Portland’s 318 miles of bike lanes scored it top honors in CNN as the most bicycle-friendly city in America.

With 37,000 sq. feet of parks – one being the world’s smallest (24-inches across), Mills End Park – an innovative dining landscape, and a well-read community – Powell’s City of Books occupies an entire city block and is the world’s largest independent, new and used bookstore – Portland’s a natural and cultural epicenter. Plus, Oregon doesn’t have sales tax, and it’s one of only two states (the second being New Jersey) where attendants pump gas for you.

And if you’re concerned about rainy days, don’t be. “It occasionally rains, and there are more light and bright days than Seattle,” says Senter. But then again, nobody’s looking at your hair anyway.

For more on Portland, visit TravelPortland.com.

Scenic grandeur! Downtown charm! Wine country! Is there anything Grand Junction doesn’t have? According to its residents, the answer is, decidedly, no.

Ranked six in Outdoor Life‘s The 35 Best Hunting and Fishing Towns in the U.S., Grand Junction is an outdoor enthusiast’s dream.

“Living here, I don’t sit in a chair,” says John Rodwick, 72, a six-year resident if Fruita, Grand Junction’s neighboring city. “Just the other day I went out and did a 25-mile bike ride, and it was absolutely delightful,” he added, noting the area’s typically mild weather – low 70s even in mid-October – and clear, sunny skies.

So how about that scenic grandeur? Surrounded by Colorado National Monument to the west and Grand Mesa – one of the largest flat-top mountains in the world at 35-miles across – to the east, Grand Junction’s breathtaking landscape is hard to compare.

“We’re surrounded by these beautiful mountain edifices,” says Rodwick. “We arrived on a hot summer afternoon to visit relatives, and it just made my socks fall off.”

With nearly 20 wineries, they don’t call Grand Junction Colorado’s Wine Country for nothing. The annual Colorado Mountain Winefest – held during the third weekend in September – is the preeminent wine festival. Showcasing vino from 50 different vineyards throughout the state, it’s held a mere 10 miles east of Grand Junction in neighboring Palisade.

“The beauty of it is that many people bring their bikes and cycle from one vineyard to another,” says Rodwick.

For more on Grand Junction, go to VisitGrandJunction.com.

If you appreciate art deco, a thriving arts community, scenic byways and eclectic dining that range from ostrich burgers to black-eyed peacakes, then Asheville may be the town for you.

“It’s a crossroads for all walks of life,” says Mike Dowling, 70. Dowling, who’s lived all over the world, settled in Asheville four and a half years ago after an exhaustive search of places to retire. “For what I wanted in my older years, Asheville had it all,” he says, noting that the robust arts community was a particular draw for his wife, who’s an artist.

Beyond being a culture epicenter for North Carolina with multiple theater companies, its live-music scene is hard to beat with everything from local bluegrass to classical music.

The Asheville Symphony Orchestra can host an audience 2,300-strong at the Thomas Wolfe Auditorium. Clubs and concert halls throughout the town host world-class headliners, including Blondie and Bonnie Rait. And then there’s are local musicians, who frequently jam out in local pubs throughout the year.

Speaking of the mountains, it’s hard to talk about Asheville without mentioning the Blue Ride Parkway, a scenic byway that meanders through Great Smoky Mountains National Park.

With its mild weather, unique architecture – more 1920s and 1930s art deco architecture can be found in downtown Asheville than in any other Southeastern city outside Miami – and thriving community, Asheville’s one of those unique places that has a little bit of something for everyone.

In the middle of the country’s breadbasket sits Tulsa, a town selected as one of the 10 most affordable places to retire by AARP magazine.

More than just an economical place to live, Tulsa’s vibrant college scene – it’s home to Oklahoma State University – not only offers opportunities for continuing education, but also ensures plenty of events go on throughout the year. “I’m spoiled here,” says 41-year resident Iris Chandler, 80. “Plus, the climate is great, and we don’t see severe weather except in February.”

With ballrooms, aquariums, zoos, museums and a thriving golf scene – it was home to the 2007 PGA Championship and boasts 19 public courses – Tulsa’s more than just a livable city. It’s a thriving community. And the best part, according to residents, is its people.

“They’re such giving and caring individuals,” says Chandler, who’s no exception to the rule. A year-round volunteer, Chandler not only lends a hand for local events, but she’s an active member of the AARP in her community.

Lastly, you can’t talk about Tulsa without mentioning its fairs and fests. The Oklahoma State Sugar Art Show draws elite bakers to show off their decorating skills and lifelike sugar flowers. During its 10-day run through September and early October, the Tulsa State Fair attracts more than 1 million visitors while the city’s Oktoberfest celebration was named one of the top 10 in the world by USA Today and one of the top German food festivals in the nation by Conde Nast Traveler.

For more on Tulsa, go to VisitTulsa.com.

What do you get when you cross white sand beaches with the Greatest Show on Earth? One of the best-kept secrets in Florida.

While Northerners flock to the eastern coast to set up shop near the Atlantic, native Floridians know Sarasota’s really where it’s at.

Nestled next to the Gulf of Mexico, Sarasota is known as “Florida’s Cultural Coast” and is home to the Sunshine State’s oldest orchestra, a visual arts community, dozens of performing arts venues, opera, theater and ballet companies, and the city’s crown jewel: the Ringling Museum of Art.

Located on a 20-acre waterfront property once home to John and Mable Ringling, the museum not only boasts works of art from the past 500 years, but is also home to the palatial Cà d’Zan mansion, a Venetian Gothic architectural beauty that sits on Sarasota Bay and was featured in the film “Great Expectations,” starring Gwyneth Paltrow and Ethan Hawke.

With a walkable downtown, vibrant performing arts scene, and the No. 1 beach in the U.S. – Siesta Key Beach – according to Dr. Beach, Sarasota has it all.

Plus, “the weather is pretty great,” says Percy Watts, 89, a 28-year Sarasota resident. Watts, who moved to Florida to be closer to family, says he wouldn’t choose anywhere else to retire.

For more on Sarasota, go to VisitSarasota.org.